Why is gold stuck? Analysts see 'ladder approach' when it comes to gold price rally in 2021 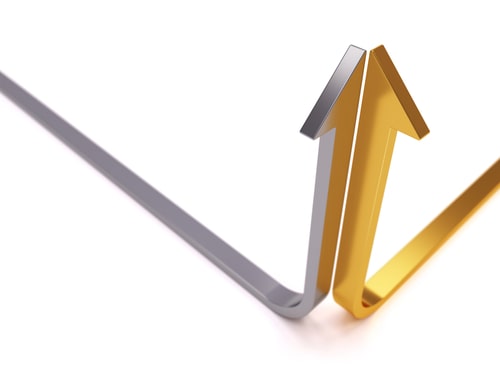 (Kitco News) Gold cannot break out of its wide trading range between $1,800 and $1,900, with the precious metal holding support well yet lacking momentum to move higher.

"Nothing goes in a straight line. It is consolidating. Looking for something to keep the momentum going," said Kitco Metals global trading director Peter Hug.

After seeing an unexpected jump on Wednesday, when Joe Biden was being sworn in as president of the United States, the $1,870 an ounce level turned out to be too strong of a resistance point for gold as the precious metal consolidated back to the $1,850s.

On Wednesday, the hope of a swift passage of Biden's $1.9-trillion relief bill triggered a rise in the metal. But since then, markets began to price in more Republican resistance. At the same time, Biden has been warning that the U.S. could see 100,000 more deaths from COVID-19 in the next month.

"Trader and investor enthusiasm was dented by the new Biden administration's focus on the still-raging pandemic in the U.S. and other parts of the world," said Kitco's senior analyst Jim Wyckoff.

However, it will depend on how quickly the stimulus package could be approved and in what form, said Hug.

"The question is, it hasn't been done yet. With Kamala Harris, Biden has the majority, but he might get some resistance from Republicans. It is still up in the air. That stimulus needs to get into the economy quicker rather than later. This uncertainty of what's going to happen is creating some fear," Hug pointed out. "The $1.9 trillion is a fairly aggressive number. Now, there's anxiety how quickly things can get done."

Stocks are under pressure as people take some profits off the table and turn to cash, added Hug.

At the same time, the longer-term macro picture has not changed, said Hug. "The stimulus package is very inflationary," he said.

Yellen's testimony on Tuesday indicated that it is important to go "big" when it comes to government spending.

"Without further action, we risk a longer, more painful recession now — and long-term scarring of the economy later," Yellen said. "Neither the president-elect nor I, propose this relief package without an appreciation for the country's debt burden. But right now, with interest rates at historic lows, the smartest thing we can do is act big."

Inflation will be the key trigger behind gold's next rally once the stimulus is passed, said RJO Futures senior commodities broker Daniel Pavilonis.

In the past, when the Fed tried to keep rates low artificially, it led to runaway inflation, Pavilonis noted.

"This can possibly turn into something like that," he said. "People are already looking outside of government's CPI numbers and seeing inflation moving much higher. Markets are not prepared for that."

The bond market started to signal higher inflation with rising yields, but the stock market is still in the dark, Pavilonis added.

"Right now, gold in a range and is pausing. Inflation could break gold out in a big way," he said. "When everyone will start to get back to work and supply issues arise. There are big pockets in the economy that could really start to shift this thing around. That would translate into much higher gold prices."

The problem with inflation coming back is that the Federal Reserve might not be able to control how fast it rises once it gets above 2%.

"Looking at the macro picture, the Fed is likely to downplay inflation in Q1. They want to make sure they are at steady 2% inflation, and they will not raise rates right away. This is where you see 2% turn to 4% and 8% over a few quarters," Pavilonis described.

Many of today's stock traders did not experience the real economic wars or remember the dot-com bubble, Pavilonis warned.

Hug is still bullish on gold but noted that the price action would likely be more of a "ladder approach," with prices rising in steps.

Pavilonis is neutral on gold at the moment, seeing more range-bound trading until stimulus and inflation start to kick in. "We are in a very wide range between $1,766 and $1,965. When we can close above $1,965 an ounce, gold will be ready to rally. On the other hand, if we close below $1,766, that means the trend is down."

On the radar next week

Next week will be all about the Federal Reserve monetary policy meeting on Wednesday and some critical macro data, including Thursday's preliminary U.S. Q4 GDP figures.

"Federal Reserve Chair Jay Powell has the makings of a pretty good poker player. He seems to be almost showing you his hole cards, claiming to have a strong hand in the battle against inflation, and therefore no need to raise interest rates until another three years have passed, and no need to start even talking about paring back the pace for Fed bond purchases. But should investors call his bluff?" wrote CIBC Capital Markets chief economist Avery Shenfeld.

No significant changes are expected during this meeting, which is why markets will be focusing on Powell's press conference.

"Powell may use the opportunity to downplay the prospect of tighter monetary policy, despite the likelihood of more fiscal stimulus soon, which could put renewed downward pressure on the U.S. dollar and give a slight boost to commodity prices, particularly gold," said Capital Economics on Friday.

Also, there will be a slate of housing data — house price index on Tuesday, new home sales on Thursday, and pending home sales on Friday.

"Data-wise, the highlight will be 4Q GDP growth. Expectations have been lowered marginally on the back of weaker consumer spending numbers and falling employment in December, but we should still expect a 4%+ growth figure. We are more worried about Q1 given the loss of economic momentum following the latest Covid spikes and the reintroduction of containment measures in many areas," said ING economists.