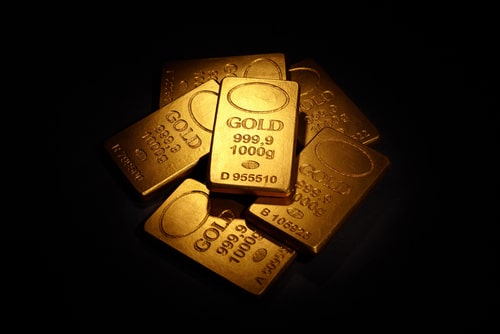 (Kitco News) Every time there is an acceleration in the gold price these days, a quick pullback follows. This is precisely what happened on Monday as gold first rose above $1,865 an ounce and then gave up all of its morning gains.

This price trend has kept gold stuck in a wide trading range between $1,800 and $1,900 an ounce. "Investor interest is muted at present," said Commerzbank analyst Carsten Fritsch.

The precious metals market is clearly waiting for a catalyst that could take gold higher or lower, with analysts pointing to the Federal Reserve Chair Jerome Powell's press conference on Wednesday as a possible trigger.

"The impetus needed to catapult the gold price out of this trading corridor appears to be lacking at present. It remains to be seen whether Fed Chair Powell will manage to do so in his press conference following Wednesday's FOMC meeting," said Fritsch.

Market participants are not expecting to see any change in rates during the FOMC meeting, which wraps up on Wednesday. This is why the focus this week is on Powell's presser.

During the last press conference, Powell has downplayed the possibility of reducing the Fed's long-term asset purchases in 2021. But recently, several regional Fed presidents started talking about tapering.

"This week's FOMC will likely feature a push-back against recent tapering talk, which should play into gold's favor," said strategists at TD Securities.

The concern that the Fed might start unwinding its accommodative monetary policy sooner than expected has triggered a rise in Treasury yields, which have been putting downward pressure on gold.

"Powell may use the opportunity to downplay the prospect of tighter monetary policy, despite the likelihood of more fiscal stimulus soon, which could put renewed downward pressure on the U.S. dollar and give a slight boost to commodity prices, particularly gold," said Capital Economics on Friday.

At the same time, the Fed is also likely to highlight some recent weakness in the U.S. economic data, which will further confirm the need for the central bank's supportive monetary policy, analysts said.

On Monday, gold prices first rose on lower Treasury yields but then declined as the U.S. dollar index hit new daily highs. February Comex gold futures were last trading at $1,853.80, down 0.13% on the day.

The recent trading activity in gold and its relationship to the yield curve has revealed gold's new regime, TD Securities pointed out.

"This price action is putting a halt to the recent steepening in the yield curve, which is supportive of gold in the near-term, but also highlights gold's new regime — in which prices are relying on a slump in Treasury yields, rather than rising inflation expectations," the strategists said. "This doesn't bode well for gold flows as the bloated positioning slate still suggests that a modest rise in rates could reinforce the pain-trade lower."

Gold's near-term direction is on either side of its 200-day moving average, around $1,847.80, MKS PAMP Group said on Monday.