Thursday, the World Gold Council (WGC) published its fourth-quarter and full-year demand trends report for 2020, which showed broad-based declines in demand for the precious metal. The report said that fourth-quarter demand totaled 783.4 tonnes, a drop of 28% from the fourth quarter of 2019, the weakest quarter since the 2008 financial crisis.

“The coronavirus pandemic, with its far-reaching effects, was the driving factor behind weakness in consumer demand throughout 2020,” the report said.

While 2020 wasn’t a great year for physical gold demand, Juan Carlos Artigas, Director of Investment Research at the WGC, said in a telephone interview with Kitco News that trends in the gold market are playing out as their research would suggest.

In the face of dismal physical gold demand, the market saw unprecedented investor demand. The report noted that holding in global gold-backed exchange-traded funds (ETFs) grew by 877.1t during 2020, reaching record year-end holdings of 3,751.5t. The increase comes as the fourth quarter saw net outflows of 130 tonnes as prices dropped sharply in November following positive news of potential vaccines for the COVID-19 virus.

The gold market also saw healthy bar and coin demand. The WGC said that global bullion demand increased by 10% in the fourth quarter and rose 3% for the year to 896.1 tonnes. 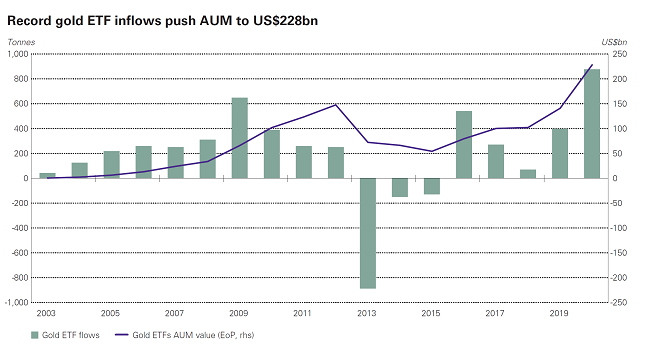 Looking past the headline declines, Artigas said that the gold market remains healthy, even as COVID-19 has created some significant headwinds for the physical market.

“There is a duality to gold and the market is doing exactly what we would expect it to do,” he said.

Artigas added that there are expectations that investment demand will continue to dominate the marketplace.

“We expect that low interest rates are here to stay and that is only going to be supportive for gold,” he said. “Although we have seen a lot of positive news about vaccines for the virus, there is still a lot of uncertainty out there. There are still plenty of risks in 2021 that will continue to support gold.

As investors try to understand the dichotomy in the gold market, Artigas said one significant surprise in the report is it appears that investors are holding on to their gold. He added that this shed some critical light on the health of the gold market.

Global recycled gold only grew by 1% in 2020, despite prices reaching record highs. Artigas said that this was a stark contrast in 2011 when consumers were selling their gold as prices climbed.

“Investors are taking a more strategic interest in gold. Nobody is rushing out to sell their gold because they see that it has value,” he said.

While investment demand is expected to continue to drive gold prices through 2021, investors still have to watch the complete market landscape.

Jewelry demand, which makes up half of the global demand picture, fell to record levels, the WGC said in its report. The report noted that the COVID-19 pandemic has decimated the jewelry market.

Total annual jewelry demand dropped to 1,411.6 tonnes, a drop of 34% from 2019 and the lowest level since WGC has been recording jewelry demand, the report said.

Artigas added that it’s not surprising that jewelry demand was so weak as many gold stores were closed. Consumers were also confined to their homes as nations implemented strict lockdown measures.

However, the WGC is optimistic that the gold market will see a resurgence of pent up demand as nations deal with the virus.

“While jewelry demand volumes are likely to remain relatively subdued as COVID-19 continues to impede the normal functioning of many markets across the globe, mass vaccination programmes and signs of improving economic indicators imply that we expect to see continued, if tentative, improvement in the sector in 2021,” the analysts said in the report.

“Although 2020 marked the 11th consecutive year of net purchasing by central banks, it was the lowest annual total for central bank purchasing since that trend began in 2010,” the report said.

Analysts have noted that central banks worldwide were more concerned about supporting their domestic economies than increasing their gold reserves.

Artigas noted that although central bank demand has slowed, it has not evaporated. He added that the WGC expects central banks to continue to be net purchases of gold for the foreseeable future.

Finally, turning once again to the gold supply, while recycling increased in 2020, the WGC said total supply dropped 4% last year. “The first annual decline since 2017,” the report said.

The report said that total Mine production last year was 3,400 tonnes, dropping 4% from 2019. “This was the second consecutive annual decline in production – and the first back-to-back annual drop since 1975,” the report said.

“COVID-19 pandemic interruptions were the main reason for lower mine production in 2020, and the impact varied both geographically and over time,” the report added.