The world's largest silver mines in 2019

(Kitco News) - KGHM Polska Miedz was the largest silver producing operation worldwide in 2019. Eight out of the top ten silver mines have seen a decline in output in 2019.

Silver is often outshone by gold, with most precious metals’ investors paying attention to the yellow metal. But silver is in the spotlight again as its prices have increased by almost 125% since March 2020, driven by strong physical demand. 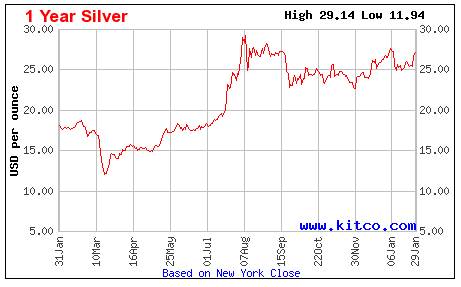 Exposure to industrial demand makes silver an attractive commodity and irreplaceable component in many applications – particularly for industry-related companies and their investors.

Only around 30% of annual supply comes from primary silver mines while more than a third is produced at lead/zinc operations and a further 20% from copper mines. The polymetallic ore deposits from which silver are recovered account for more than two-thirds of the world’s silver resources.

We looked at the world’s top 10 mining operations producing silver that are separate reporting units and which have recent mined silver figures disclosed by the owners/operators. 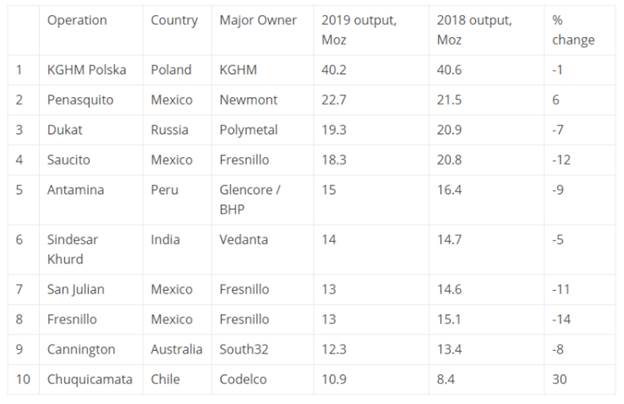 KGHM Polska Miedz Mining Hub consists of Rudna, Polkowice-Sieroszowice and Lubin primary copper mines located in Poland. In addition to copper, it is also an important source of silver, gold and other metals. With 40.2 Moz of silver mined in 2019, KGHM Polska Miedz is the largest silver producing operation worldwide.

Dukat silver mine is one of Polymetal’s first and original assets. It is the largest primary silver operation in Russia and Polymetal’s flagship operation. Silver output at Dukat dropped by 7%, from 20.9 million ounces in 2018 to 19.3 million in 2019.

With 18.3 million ounces of silver produced in 2019, Fresnillo’s Saucito silver mine in Mexico is fourth largest silver operation in the world. Full-year 2019 silver production at Saucito decreased substantially by 12 %.

Fifth in our ranking, the Antamina mine is a large copper-zinc-molybdenum-silver-lead operation, located in the Andes mountains 270 kilometres north of Lima, Peru. The deposit is located at an average elevation of 4,200 metres. The owners are BHP Billiton plc (33.75%), Glencore plc (33.75%), Teck (22.5%) and Mitsubishi Corporation (10%). The mine is an open pit, truck/shovel operation. A 302-kilometre slurry concentrate pipeline transports copper and zinc concentrates to the port for shipment to smelters and refineries world-wide. Silver production dropped by 9% to 15 Moz in 2019.

Sindesar Khurd Mine is India’s largest underground mine with production of 5.1 million MT in FY 2020. With average zinc reserve grade of 5.9%, the mine differentiates itself with its silver-rich zinc-lead deposit and highly automated and low cost of operations.

Sindesar Khurd is an underground mine, commissioned in 2006. The mine was initially opened as a satellite of Rajpura Dariba Mine. It is located 82 kms north-east of Udaipur, in the State of Rajasthan in India. It is a high silver content mine and has a uniform ore body with good zinc and lead grade. Access to the mine is presently through declines (North and South) and an underground shaft. It has a reserve of 37.3 million MT and mineral resource base of 79 million MT as on March 31, 2020.

The San Julián silver-gold mine in Mexico is Fresnillo’s cornerstone project. The geological potential identified in the region thus far may be sufficient to establish a new mining district in the future. The San Julián project includes construction of two plants: i) a dynamic leaching plant to treat ore from the veins and ii) a flotation plant with 6,000 tpd capacity to process ore from the disseminated body. San Julian silver-gold mine contributed 24% to total Fresnillo’s silver production and generated 15% of the company’s total adjusted revenue (2019).

Fresnillo’s eponymous mine is the eighth largest silver producer and one of the world’s oldest continuously operating mines. It is remarkable that mining operations have been recorded at the site as far back as 1554. 2019 full-year silver production decreased by 14% to 13 Moz.

South32’s Cannington silver-lead-zinc mine, located in north-west Queensland, was a long-time undisputed leader in silver production, with a record 44 million ounces of silver achieved in 2005. Since then, silver output dropped significantly due to reduced silver grades, and Cannington finally lost its number one position in recent years, landing just ninth in 2019. Silver output at Cannington was 12.3 million ounces in 2019, or 8% less compared to 2018 numbers.

Codelco’s Chuquicamata mine, one of the largest open pit copper mines and the second deepest open pit mine in the world, is located 1,650km north of Santiago, Chile. The mine, popularly known as Chuqui, has been operating since 1910. Chuqui is a primary copper mine while also being a major source of silver, gold and molybdenum. Chuqui is tenth largest silver producing operation in the world with 10.9 Moz of silver output in 2019.