Is there enough silver? The real story in silver is the physical squeeze 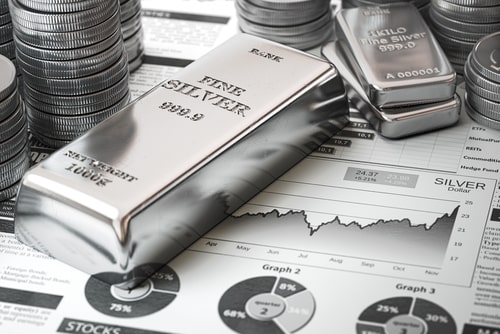 (Kitco News) The mainstream media got the silver story wrong, according to Guardian Vaults business development manager John Feeney, who said the real story is in the physical squeeze, and it is far from over.

"A lot of the mainstream media picked up the silver story, calling it a short squeeze, which was misguided. The real story that is happening is a physical squeeze in the market, where it is really difficult to get stock," Feeney told Kitco News on Monday.

Even after silver prices pulled back from eight-year highs last week, strong demand in the physical market remained.

"We continue to see robust demand for silver even after this pullback. We sold out of our holdings last week pretty quickly, and we are trying to re-stock. Even Australia's Perth Mint had to stop taking orders on silver cast bars temporarily last week. We continue to see the physical squeeze in silver happening."

Usually, when the market sees a significant increase in demand for physical metal, bullion dealers run out pretty quickly. "We are still seeing that," Feeney said.

And the more demand there is, the longer the delays will be as refineries fall behind. "Also, you often see refineries limit their production to one standardized size and stop producing 10-ounce bars or 100-ounce bars and focus on kilobars."

But, does this new demand translate to higher prices, and how soon? Feeney noted that it is a long-term bull play with a time period of about 12-24 months. He also added that silver could see the same bull rally as palladium.

"If you think of silver like palladium. Silver is an industrial metal that gets used up in solar panels and so forth. So, moving forward, if we continue to see a really strong increase in investment demand combined with strong fundamentals in industrial demand, quite quickly you could see the physical market dry up," Feeney warned.

Often this becomes a self-sustaining cycle, where news around physical shortages in any commodity tends to attract speculators.

"This is similar to what happened in palladium. There was strong industrial demand in palladium, prices started to move into a bull market. You heard stories circulating around physical supply drying up. And then what happened was large speculators started entering the palladium market, and then the bull market really took off," Feeney said. "I look at silver, and I could see something like that potentially happening over the next 12-24 months as the industrial demand continues to be robust as well."

The silver market has been largely under-owned and underinvested until 2020, when silver began its bull rally and outperformed gold.

"Silver had relatively poor performance over the last few years prior to 2020. There wasn't too much investment in the silver mining sector over that period. Prices were quite depressed," Feeney said. "The move that we saw in 2020 was just the beginning of a bull market."

Feeney said the metal could rise into the $30s range between now and the end of the year in terms of price projections. He also highlighted that once Silver breaks above $30 an ounce, new investors will come in and begin to chase that price higher.

"We get to see silver go through a mainstream bull market where everyone is involved. It is still a small percentage of the general population that are investing in silver, which leads me to believe that investment demand could double from here," he said. "What happens, though, is price often drives demand. If you do see the price break out above $30, pretty quickly you get a lot of investors that come into the market to chase that price, and we could see prices really take off."

Feeney didn't rule out the $50 target either but did stress that it will take a few years to get there on a sustainable basis.

"Just given the amount of money printing combined with how under-owned silver has been for the last seven years. Plus, industrial demand combined with increased investor demand, we could see that $50 mark," he said.

To get a rough idea of where silver prices will be in the next few years, Feeney pointed to the gold-silver ratio.

"If you are just getting into the market now, the first thing to look at is the gold-silver ratio. In this cycle that we are currently, which is a bull market in precious metals, silver tends to outperform gold. During this cycle, it makes sense for the ratio to go back below 50 and potentially into the 40 range. When you factor that in, then you can take a look where you envision silver to be," he said.

Silver is looking more and more like the metal of the future and a substantial investment for 2021, Feeney pointed out. The big driver that is here to stay is a global move into renewable energy, he said.

"Under the Biden administration, we will see a lot of money getting moved into solar panel production. That is happening globally too. If you look at the solar market, the outlook for the next 5-10 years is very bullish for silver."

Also, there is an argument to be made for the start of the commodity supercycle. "A lot of analysts think that we are at the beginning of it. There has been a lot of underinvestment in commodities over the last few years. A lot of capital moved into the tech sector and hardly any capital in comparison moved into the commodities sector," Feeney said.

Monday's Charts for Gold, Silver and Platinum and Palladium, Oct. 25