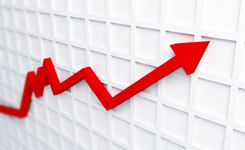 The company’s underlying profit of $553 million was $273 million (or 98%) higher than the prior period primarily driven by higher realised gold and copper prices, higher copper production at Cadia, a positive fair value adjustment recognised on Newcrest’s investment in the Fruta del Norte finance facilities, and a full six months of improved Red Chris performance.

‘Free cash flow before M&A activity’ was $334 million (or 315%) higher than the prior period which included growth investments in the acquisition of an interest in Red Chris for $774 million and an additional $61 million investment in Lundin Gold which increased Newcrest’s ownership to 32%.

In addition, Newcrest announced new dividend policy that targets 30-60% of annual free cash flow to be paid in dividends (was 10-30%). As a result, the Newcrest's Board has determined that an interim fully franked dividend of US$ 15 cents per share (100% higher than the prior year) will be paid on Thursday, 25 March 2021.

"The strong financial results for the half year show how much the increase in gold price has translated into improved profitability, record half-year free cashflow and an increase in returns to shareholders in the form of a fully franked interim dividend of US$ 15 cents per share, 100% higher than last year,” said Managing Director and CEO Sandeep Biswas.