Will gold's selloff accelerate next week? Search for a bottom in gold price 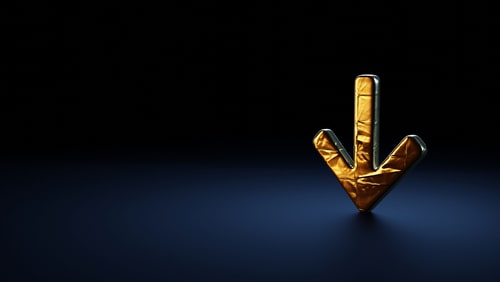 (Kitco News) Gold was hit by a slate of negative news this week, and the disappointing price action reflected that, with the precious metal down $45 from last week's close. But the question on everyone's mind is just how much further can gold fall before entering a new bullish phase?

The mid-$1,700s level is a great buying opportunity, according to analysts. Still, it doesn't mean gold won't drop to even lower levels next week.

"If you look at gold in a basket with other metals, it is only gold that has gone down. Silver is doing well, so are platinum, palladium, and rhodium. You are getting pretty significant consistent buying interest in white and industrial metals," said Kitco Metals global trading director Peter Hug. "Gold has been affected because of the significant rise in the 10-year yield."

The 10-year Treasuries' yield started the week at 1.15% and rose to 1.33% by Friday. "This has taken some of the edge off gold because that rise in yields has produced strength in the U.S. dollar," Hug explained.

The news headlines were also not too encouraging, with BlackRock choosing silver over gold and DoubleLine CEO Jeffrey Gundlach picking bitcoin over gold as a better "stimulus asset."

Next week will be all about where the U.S. dollar moves, LaSalle Futures Group senior market strategist Charlie Nedoss told Kitco News. "Dollar strength could abate next week, and we could see gold bouncing off the bottom," Nedoss said.

The fact that gold is currently trading above $1,778 gives the precious metal a chance to go higher next week, Hug pointed out. "This is based on technicals, assuming gold can stay above that level on the close above it. I'd rather be long the market at $1,775 an ounce than short," he said.

Plus, the underlying print for inflation seems to be accelerating, Hug noted, citing stronger PPI data. "I consider these pullbacks as buying opportunities, not opportunities to panic and liquidate," he said.

If yields and stocks continue to rise, gold could be looking at much lower levels, warned RJO Futures senior commodities broker Daniel Pavilonis.

"If stocks get stronger, yields get stronger, and gold is getting to a level where if we start closing below yesterday's lows of $1,766, we can go a lot lower," Pavilonis said. "For me, that is the line in the sand. If we stay above it, we are range-bound."

Gold can even touch as low as $1,200 this year before resuming its bullish trend, Pavilonis noted. "It won't go down straight to $1,200, but as real rates go higher, this will ultimately weigh on gold before this dynamic shifts," he said. "The $1,527 level would be the first real support."

On the downside, gold is at risk of losing another $100, added Melek, citing rising yields. "The yields curve continues to steepen without inflation moving higher. Real rates are moving up," he said. "If we get real interest rates moving higher, it is going to be very difficult to see big flows into gold."

Another obstacle for gold is its competition with bitcoin. The cryptocurrency being treated as digital gold by investors, added Pavilonis.

"If we put bitcoin in the same camp as metals, it outperformed gold and silver. This is what people are looking at now. Gold has traditionally been an alternative — a hedge against inflation if you want to get yourself outside the system. This is how bitcoin is now being perceived as well," he said. "But as bitcoin gets more expensive, investors will ask themselves why not buy gold?"

Next week, one of the key events will be Federal Reserve Chair Jerome Powell's testimony before the U.S. Senate on Tuesday.

Markets will be looking for another confirmation that the Fed will be ignoring rising inflation and keeping rates near zero. Investors will also want to see under what conditions the Fed would be looking at introducing yield-curve control.

"If the Fed actually starts to raise rates because we are starting to see accelerating inflation, that would be a pivotal moment for gold," Pavilonis said. "Previously, Powell said that the Fed is letting inflation go. I think that would cause the futures to move lower and yields move higher, might cause gold to go down."

The words Powell will choose to use will be critical because his testimony is tied to the publication of the Federal Reserve's semi-annual monetary policy report, said ING economists.

"It will be a tricky path for Powell to tread," the economists said. "It will be difficult to argue that the economy remains weak and risks are skewed to the downside, but he won't want to sound too upbeat either as that could trigger further sharp moves higher in Treasury yields, which could impede the recovery and result in broader market volatility."

The focus will also be on the U.S. stimulus package next week, which will likely see more U.S. officials stressing how critical it is to get it passed.

"Powell might reiterate that there is a need for more fiscal stimulus. Treasury Secretary Janet Yellen already came out and indicated that it is critical that the stimulus package gets out. There is enough juice behind the concept to get a stimulus package passed," Hug said. "However, there are some questions that remain. We are seeing some resistance not only from the Republicans but also Democrats. I want to see if they have to water down the bill."

The big macro data day will be Thursday, with the preliminary U.S. Q4 GDP, durable goods, and jobless claims all on the docket. Markets will also be digesting the PCE price index on Friday.

Other data will include the U.S. house price index and CB consumer confidence on Tuesday, followed by new home sales on Wednesday.

"U.S. data in the week ahead should be a modest upward revision to the 4Q20 GDP figure and then on Friday, January personal income numbers. This is expected to jump on the back of stimulus cheques – but should be priced in by now. We'll also see the Fed's preferred measure of inflation – the core PCE deflator – which is expected to be contained near 1.4/1.5% YoY in January," ING FX strategists pointed out.