SYDNEY (Reuters) - Macquarie Group lifted its profit guidance on Monday, sending shares to 12-month highs, as its large North American energy business profits from the winter storms sweeping across Texas and other states.

Macquarie said it expects its fiscal 2021 profit to jump by as much as 10%, after warning just two weeks ago that earnings would be “slightly down”.

The energy business unit, designed to move large quantities of gas to meet unexpected demand, has single-handedly increased the overall profit forecast of the global investment bank by about A$400 million, analysts said.

Macquarie is the second biggest gas marketer in North America, behind oil major BP. It purchases natural gas and moves it along pipelines and grids, typically from an area where usage is low to high-demand markets.

The deadly winter storm that crippled infrastructure and left millions of Texans without power meant electricity generators had to compete for natural gas supplies, pushing up prices sharply in the deregulated market.[nL1N2KR0DK] 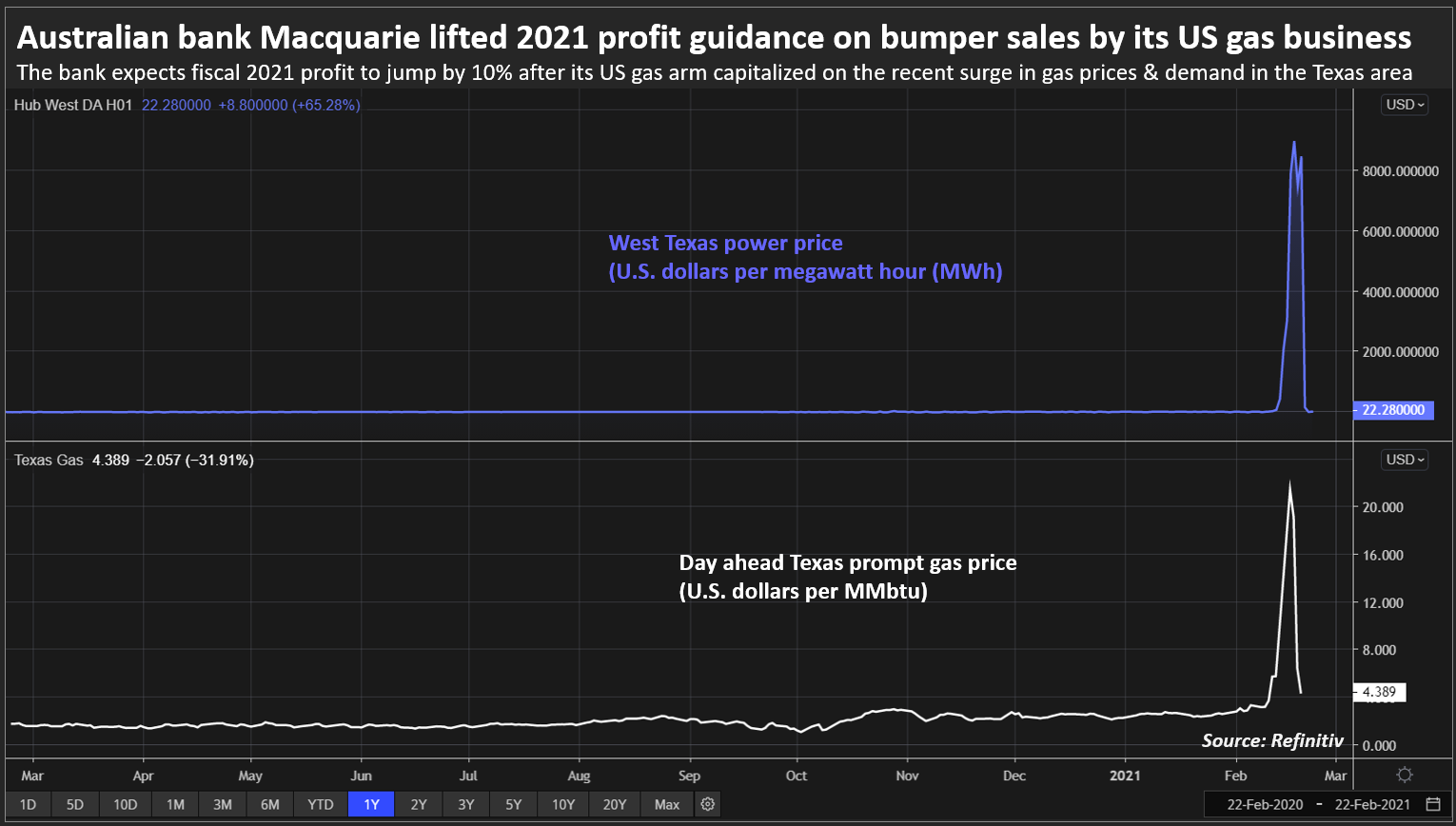 The supply crunch has provided Macquarie with an unexpected windfall.

“Macquarie appears to be capitalising well on volatility and financial market dislocation,” Bank of America Securities analysts said in a note, as it increased its earnings forecasts for the Sydney-headquartered company.

Macquarie’s performance hurt last year by the pandemic, with subdued deal-making and deteriorating economic conditions leading to a rise in impairment charges.

But a strong initial public offering of its majority-owned data analytics software business, Nuix, late last year and a fillip in the energy business have helped push its share price back to pre-pandemic levels.

The company, which also operates Australia’s largest asset manager and investment banking business, is set for extra boost from a rebound in local M&A activity this year.

Macquarie’s shares were 4.31% higher at A$148.39 early on Monday, the highest level in a year, outperforming a broader market that was flat. The share price eased slightly in afternoon trading.

Earlier this month, the Sydney-based financial conglomerate had forecast full-year earnings for the group to be “slightly” lower than in fiscal 2020.

Macquarie’s Commodities and Global Markets division contributes close to 40% of its group earnings. Analysts had previously raised concerns that the pandemic could erode profits from the division if high energy-use industries shuttered.