Gold or bitcoin? Two assets can co-exist as gold retakes its safe-haven status 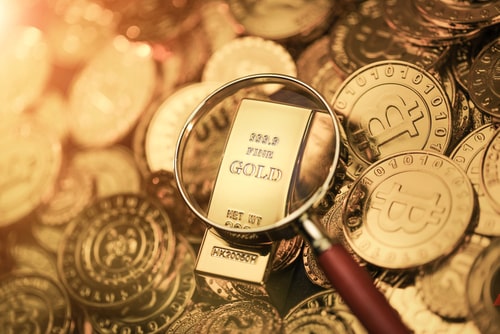 (Kitco News) The financial market has enough demand to sustain both gold and bitcoin as safe-haven assets, according to Digix co-founder and COO Shaun Djie.

And even though the gold space has been quiet this past few months, especially when compared to bitcoin, Djie sees the precious metal climbing back up to $2,000 an ounce by the end of the year. "I won't be surprised to see bitcoin trading at $100,00 by the end of the year. For gold, I wouldn't be surprised to see it close to $2,000 level again," he said.

The reason for his optimism is uncertainty, which is still very much in the air. Djie warned that the pandemic would not be over this year.

"We are unlikely to see everyone in the world vaccinated and borders re-open for tourism this year. This means that more uncertainty is still ahead," he said. "I would not be surprised to see a severe market correction toward the end of the year. Complete economic recovery will take longer than four years."

This is at a time when the stock market is already overvalued and has a new wave of retail investors piling money into equities in search of better profit than their savings account.

"All the excess liquidity out there has been flowing to highly speculative assets. The stock market is overvalued today. We are seeing new all-time highs almost every other week," he added. "People are finding the idea of investing a much less daunting one than two years ago in light of the social media and all the commentary out there."

Bitcoin will not displace gold

Gold and bitcoin can both rise as investors seek better stores of value. "I don't think one is meant to displace the other. Gold has been around for a lot longer. And the physical aspect of it would still be key and attractive to investors out there," Djie said.

Bitcoin attracts a different kind of investor than gold — the new digital crowd looking for safety, he described.

"The crypto world appeals to the people who have accelerated digital learning over the past 12 months. Since the COVID pandemic started, more people started to get involved in the stock market via their mobile phones. The whole wave of self-education has proliferated the understanding of bitcoin. And people are buying bitcoin on their own as a store of value," Djie explained.

This does not impact gold, which will continue to provide an attraction. "The market is sufficient enough to contain both asset classes. One would appeal to more to the digital crowd and the other more to the physical crowd," he said.

One more thing to consider in the gold versus bitcoin debate is all the regulation hints coming from U.S. officials, Djie added. "Gold will see a lot more action as regulators and different investors chime in on the narrative bitcoin. Gold will likely resume its old status as being safe-haven and a risk-free asset," he said.

The most recent comment was made by U.S. Treasury Secretary Janet Yellen, saying that bitcoin is an "extremely inefficient" way to conduct monetary transactions.

"I don't think that bitcoin … is widely used as a transaction mechanism," Yellen told CNBC. "To the extent it is used, I fear it's often for illicit finance. It's an extremely inefficient way of conducting transactions, and the amount of energy that's consumed in processing those transactions is staggering."

Djie partly agreed with Yellen, stating that bitcoin is not very efficient when it comes to transactions, but noted that the crypto's transaction efficiency is not why people have jumped aboard the crypto train.

"It is inefficient in normal transactions. But the narrative of bitcoin today is more as a store of value and not so much as a means of payment or transactions that happen on a peer-to-peer basis," he said.

Companies like Tesla, MicroStrategy, and Square have all been buying bitcoin, citing its potential as a store of value, Djie noted. "I don't think anyone out there will like to use it on a day-to-day basis for transactions. It is slow, volatile, and expensive to use."

As it becomes clear that the economy is bound to face more problems in 2021, including inflation, gold will begin to trade higher and regain its status as the safe-haven asset, according to Djie.

"Since the start of the year, the buying in gold has not been impressive as people were looking for better yields in other types of assets, such as equities and the crypto market. Gold has always been seen as a risk-off asset, but the market has been trading in a risk-on mood this year," he said. "Going forward, when the market realizes that investors should be picking gold over other assets, you'll see prices trending upwards."

Investors will not be able to ignore the warning signs for too long — inflation, money-printing, a lower dollar, low interest rates, and overvalued stock market.

"There is a lot of commentaries rightly pointing out that the stock market's performance does not rightly mirror the health of the economy. The stock market is near an all-time high, and yet we do not see the corresponding economic recovery," Djie noted. "Plus, the U.S. dollar will likely trade much lower against its peers while ]iInterest rates remain very low."

Inflation usually shows up a lot slower than other economic indicators. But once it arrives, investors should brace for an inflationary period over the next 12-24 months.

"Inflation is bound to happen because every country out there is funding its own stimulus programs. And given the likelihood of more U.S. dollars being printed, I would not be surprised to see much higher inflation towards the end of the year," he said. "Bitcoin will perform in tandem with gold."

One more risk to watch in the longer-term is U.S. President Joe Biden's stance on China.

"We are likely see a pivotal power shift in the next four years when it comes to the trade war tensions between China and the U.S., and it will cause gold to trade upwards," Djie stated.