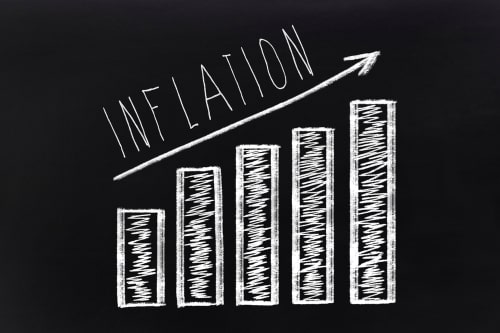 (Kitco News) As the Federal Reserve once again downplays inflation concerns, some major market players, including “Big Short” investor Michael Burry, are signaling just the opposite.

During his two-day testimony before Congress, Powell reiterated that central banks have learned how to keep inflation under control and that high inflation is “not a problem for this time.”

Powell pointed out that even though inflation may be volatile over the next few months, the effects won’t be “large or persistent.”

He added that inflation has been low for the last 25 years, and that it was not about to change. “We don’t see how a burst of fiscal support changes those inflation dynamics,” Powell said.

#POWELL: For the last 25 years, #inflation has been low. We don’t see how a burst of fiscal support changes those inflation dynamics #FED pic.twitter.com/V4JXv5D3Cr

When asked to elaborate on some leading inflation indicators, Powell noted that inflation dynamics evolve over time and don’t change overnight.

“Inflation is something I remember well. We’ve been in a low inflationary mode. And we have guidance telling markets when tapering will begin or when we will start raising rates,” he said.

Powell added that supply chain issues matter for inflation only when they are permanently challenged. “If there is a shortage of cars, prices will go up, but that doesn’t cause inflation. Inflation is something that happens year on year,” Powell said on Wednesday.

These comments are in contrast to the alarm being sounded on Wall Street. The latest heavyweight to join the conversation was Michael Burry — the investor who was profiled in Michael Lewis’ “The Big Short” book about the mortgage crisis and who now runs Scion Asset Management.

Burry sent out a warning into the Twitterverse, warning investors to brace for inflation, as he pointed to a boom in demand due to the fiscal stimulus being injected into the economy.

Burry is known for spotting the mortgage crisis ahead of time and making a fortune against the U.S. housing bubble. He became famous after his portrayal in the book and movie "The Big Short." In 2019, Burry has invested in GameStop, well before the retail frenzy took over the stock, making millions.

"Germany [the US] started by not paying adequately for its war [on COVID and the GFC fallout] out of the sacrifices of its people - taxes - but covered its deficits with war loans [Treasuries] and issues of new paper Reichsmarks [dollars]. '#doomedtorepeat," Burry tweeted.

"#History is not useless," said another tweet. "This text explores the 1970s American #inflation, which is more relevant today than one might think."

Burry went on to say that in an inflationary crisis, the government would try to crush assets like gold and bitcoin.

“Prepare for inflation. Re-opening & stimulus are on the way. Pre-Covid it took $3 debt to create $1 GDP, and it is worse now. In an inflationary crisis, governments will move to squash competitors in the currency arena. BTC. Gold.”

Burry is short bitcoin at the moment, tweeting that the “long-term future is tenuous for decentralized crypto in a world of legally violent, heartless centralized governments with lifeblood interests in monopolies on currencies.”

Since then, Burry, under the hashtag @michaeljburry, has deleted all of his tweets, emptying his account completely.

Before 2021 even started, many analysts were worried about the threat of inflation. Here’s what some major players have said recently.

Signs of inflation are already here, JPMorgan said in a note last week, adding that higher prices will trigger a new commodity supercycle.

“The tide on yields and inflation is turning,” JPMorgan said. “We believe that the new commodity upswing, and in particular oil up cycle, has started.”

Goldman Sachs noted that inflation fears are driving some parts of the market but warned that the likely inflationary surge this year will be due to the base effects when weaker inflationary months are phased out from annual measures.

“Many investors believe the spending boost will lead to higher inflation and interest rates, which would reduce the value of equity duration and increase the importance of near-term growth,” said Goldman Sachs strategists. “Historically, inflation has boosted nominal S&P 500 revenues, but weighed on profit margins as companies struggled to lift prices at the same pace as rising input costs.”

As the economy improves, inflation fears are growing, according to Citigroup.

“Lead indicators suggest that an inflation scare may be in the making,” Citigroup Inc.’s chief U.S. equity strategist Tobias Levkovich. “Companies with price flexibility should come out as winners.”

Inflation means that we don’t “have the wind at our back anymore.”

“We’ve had a long 35 to 40 years of rate decline that has been a big support behind fixed-income investing, a big support behind equity multiples expanding, and so for those of us that live and breathe investing, it’s been a wind at our back for a long time,” said Blackstoneglobal head of credit Dwight Scott. “I don’t think we have the wind at our back anymore, but we don’t have the wind in our face yet. This is what the conversation on inflation is really about.”

Inflation is a big risk to the markets, according to Vanguard.

“The big risk in the market really is inflation, whether it is transitory or whether it is something more deep rooted,” said Vanguard head of investment-grade credit Arvind Narayanan. “There’s just a tremendous amount of stimulus in the marketplace, both monetary and fiscal, that favor economic growth.”