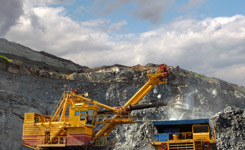 (Kitco News) - Yesterday, the Land Quality Division of the Wyoming Department of Environmental Quality (WDEQ) announced it has approved the in-situ recovery (ISR) uranium mine permit application submitted by Uranium One, owned by the Russian nuclear state corporation Rosatom.

According to WDEQ, the permit comes with a special condition: the permit reclamation performance bond contains a reduced contingency factor and only covers the monitoring wells that are already existing.

Uranium One was acquired by the Russian nuclear state corporation Rosatom in January 2013, and this deal was surrounded by a string of scandals involving allegations against the Clinton Foundation.

“I am pleased to inform you that today we control 20 percent of uranium in the United States. If we need that uranium, we shall be able to use it any time,” said the former Rosatom’s head Sergey Kiriyenko back in 2013 in his address speech to the Russian Parliament after Rosatom consolidated 100% of Uranium One and took it private.

Uranium One now is one of the world’s largest uranium producers with a portfolio of assets worldwide, including Kazakhstan, the United States, Tanzania, Namibia and other countries. Uranium One is currently producing uranium in Kazakhstan from Akdala, South Inkai, Karatau, Akbastau, Zarechnoye and Kharasan mines.