Commodities supercycle or bull rally? Analysts point to silver as the one to watch 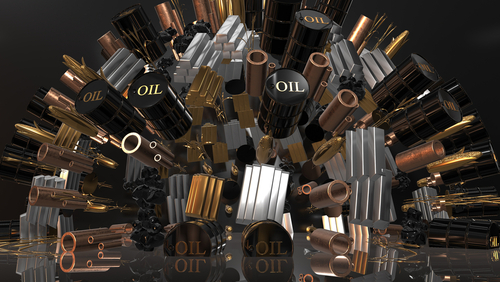 (Kitco News) - Are we on the verge of another commodity supercycle or just a post-pandemic rally after some major supply restrictions?

A number of firms favor “supercycle,” and JPMorgan said signs of inflation support the view.

"We believe that the new commodity upswing, and in particular oil upcycle, has started," the JPMorgan analysts said. "The tide on yields and inflation is turning."

The idea is that the new supercycle will be driven by the post-pandemic recovery, inflation, accommodative monetary and fiscal policies, a deteriorating U.S. dollar, and a global fight against climate change.

JPMorgan referred to what's coming as the fifth commodity supercycle, noting that commodities went through four supercycles during the last century with the last one running out of steam in 2008 after 12 years of gains.

For metals prices, this is a major development as investors are already seeing commodities like copper, nickel, and oil surge.

Morgan Stanley’s chief cross-asset strategist Andrew Sheets revealed that one of his top trades at the moment is shorting gold against copper. "Instead of 'looking up' for the biggest beneficiaries as growth improves, the more pressing issue for the market may be 'looking out' to havens that have so far ignored the improving economic story," Morgan Stanley's Sheets wrote in a note.

"Copper sits at the core of this shift, with the focus on climate change issues. The whole electrification of the energy sector will certainly place it at the real center of this movement. You only have to look at the amounts of copper used in various energy sources," Hynes told Kitco News.

Copper has traditionally been known as a barometer for industrial performance across the globe, said Digix co-founder and COO Shaun Djie.

"As more of the population gets vaccinated, the industrial activity will be picking up. Copper and crude will see a good upward trend," Djie said. "The whole digital acceleration has created a lot of demand for copper itself in forms of electronics and increased industrial activity. As businesses reopen, you'd see copper trading a lot higher."

Nickel is another standout as it is a core component of energy storage, Hynes noted. "It is important for EV batteries. Nickel has unique supply-side issues that will show up as a rally in prices. Lithium and cobalt will benefit from this cycle as well," Hynes said.

Aluminum will also see gains as part of the electrification and energy efficiency movement as well as recovery in the transportation sector, ANZ's strategist added.

But what about the precious metals?

Citi said that it is especially bullish on palladium. The bank projects for the metal to hit $3,000 over the next six months, which is $600 more from current levels.

The thinking behind this is the "significant deficit" projected for the next two years versus surging demand, according to Citi.

As economies reopen, Citi sees car sales quickly rising as the transportation sector recovering, which benefits palladium, widely used for emission-control devices in automobiles, known as the catalytic converters. It is also used in medical and industrial applications.

Silver is another precious metal that is positioned to do very well in this commodities supercycle, according to analysts.

"Silver is used in solar panels significantly. It hasn't grown as much as wind and hydro, but it is an important component within the solar industry. If you do look at the longer-term dynamics, it will benefit as a result," Hynes explained.

Silver can go as high as $60 this year, said Jon Deane, former JP Morgan MD and now CEO of Trovio.

"Short-term, silver is your best trade. There is a lack of silver around the world. There is not much silver at any refineries and getting your hands on physical silver is difficult. There is still a risk of a real silver squeeze," Deane told Kitco News.

This year, silver is also a good leverage play on gold, Deane said. "Silver will outperform gold this year. There's a lack of available silver, plus it got the climate angle. Silver could trade in the $40-$50 range and potentially even hit $60 at some point this year."

The supercycle debate focuses on whether the bull rally can last long enough to qualify as one.

Some signs do point to a supercycle, while other significant elements are missing, explained BMO Capital Markets managing director for commodities research Colin Hamilton.

"With bottlenecks emerging across many markets, global monetary policy extremely loose, and a general lack of investment in commodity supply, this is typically the period where the 'supercycle' term comes to the fore in commodity markets. In our view, while some of the elements are present for a classic supercycle in certain areas, without obvious industrial powerhouse consistently growing metals consumption well in excess of GDP, we question whether the current cycle will have the same duration," Hamilton said.

The key difference between a bull market and a supercycle is that the latter lasts for a sustained period.

"While we do not see the duration in prices or demand growth to justify the 'supercycle' term, we would note that with the supply side of the mining industry being significantly more disciplined than in the past (and assuming the current supercycle rhetoric doesn't derail this), trend industry margins and free cash flow are expected to remain much more resilient than in previous periods," Hamilton described.

Hynes pointed out that the coming rally is likely to be driven more by inflation than demand. "Certainly, we see a fairly bright outlook for the sector as a whole. But it will not be uniform across the complex, with some winners and losers. It is important to distinguish what will drive it. Not expecting to see another demand-driven cycle as we saw initially in the early 2000 and after the financial crisis as well," Hynes told Kitco News.

Once the economic recovery rush is over, demand for commodities is also likely to cool down, said Hynes. "We don't have another China coming to the fore to drive global growth to the extent that it has."

The more sustainable rally is likely to come in the metals used for renewable energy. "The energy sector looks interesting. I feel that the energy mixes are still evolving, and the shift will start to accelerate in the next few years, and that will weigh on crude oil, coal, LNG markets," Hynes added.

Another major difference this time around is investors choosing commodities as a hedge after ignoring the sector for a while.

"As opposed to the last cycle, we are seeing a lot more investor flows. This is a result of relation trade. This raises the sector and could keep the cycle running hotter for longer. "We are starting to hear that managers are looking at commodities for the first time in a long time. This plays an important part in maintaining this rally and potentially pushing it to levels you wouldn't expect," Hynes said.

There has also been a new development when it comes to increased home electronics demand during the pandemic, added Hynes.

"It could turn out to be a short-term phenomenon, but it is worthy to note. As people work from home, demand for electronics is rising. Whether the working population has geared up already or whether it will be an ongoing shift, there are ramifications for the demand for key metals here as well," he said.

Battery metals have the most room to run in this rally, added Hamilton while noting that precious metals are likely to outperform the base metals in the second half of the year.

"We expect most metals to start trending lower over the coming months as China speeds up monetary policy normalization and thus recommend relatively defensive exposure. From current levels, we would expect precious metals to outperform industrial peers into H2, while the battery raw material rally still has some time to run," he said.