Losing streak: Gold price down nearly $200 since start of the year, what's next? 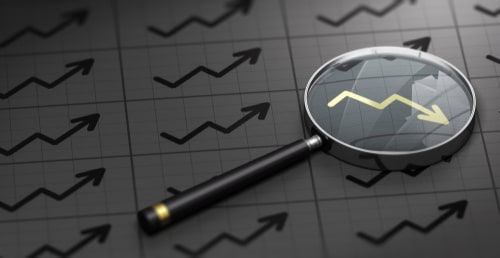 (Kitco News) Gold is looking at its second month of losses in 2021 as markets wrap up February, and analysts warn of more downside action with the precious metal testing critical support levels.

After kicking off the year around $1,912, the precious metal touched a fresh eight-month low of $1,714 on Friday — down nearly $200 since the start of the year.

The main downward triggers for gold have been the rising U.S. 10-year Treasury yields, which hit a one-year high of 1.6% overnight, and a stronger U.S. dollar.

This advance is important in how it compares to the rise in yields in other countries, Hug pointed out. "It is significant in the sense that European rates and Japanese rates are still at zero. You have to compare yield returns between countries. This is why you would expect the dollar to be stronger than where it is right now based on yields rising," he explained.

Investors are also starting to exit equities and turn to cash, which is bad for gold, added Hug. "In the context of equity markets, they are starting to take it on the chin with higher yields. Some people are exiting the equity market and moving into cash. This is why you have weakness in commodities as well," he noted.

Next week, the $1,660 level is very much a possibility, said TD Securities head of global strategy Bart Melek.

Until the Federal Reserve can successfully reassure the markets that it won't be raising rates sooner-than-expected and maybe even signal that it might consider looking at yield-curve control, anxiety will persist.

"As long as there is that ambiguity, they can say that they will allow inflation to run hot, but as long as the curve steepens, gold will have a concern that the Fed is not committed to its ultra-loose policy," Melek said. "This is why gold could settle down even lower before bouncing higher."

Equities are starting to tank every time yields are going up, as investors are worried that the Fed is underpricing inflation.

"If U.S. Treasury Secretary Janet Yellen or Fed Chair Jerome Powell come out and maybe even allude to higher inflation expectations and say that they will keep the yields down, gold will take off," said RJO Futures senior commodities broker Daniel Pavilonis. "But it might take for yields to rise to 2% before any response from the Fed."

The Biden Administration wants to continue to see the easy monetary policy, more stimulus, and a strong stock market. "But the more stimulus they get out, the more yields are going higher. They need to admit to the problem and continue with the stimulus," noted Pavilonis.

Longer-term, it is a whole different story as the U.S. economy will have to deal with massive dislocation in terms of businesses being closed, requiring low interest rates.

"Eventually, we should see gold better, especially with the record debt and equity market is risk-off sentiment," Melek stated. "Once we settle and it becomes apparent that the U.S. economy is not that wonderful, there will be a rebound in gold. The market will get around to that idea, and gold will start to move up. We could see this at the start of the second quarter."

There is a number of Fed speakers to watch next week, especially as analysts question whether the Fed will address the sudden rise in yields.

"The week will see a whole host of Fed speakers, including Fed Chair Powell, providing the Fed with an opportunity to slow the Treasury decline by at least starting to express some concern – which has been notably lacking so far," said ING FX strategists.

Fed's Powell is scheduled to speak about the U.S. economy on Thursday at The Wall Street Journal Jobs Summit. The event will be live-streamed.

In terms of macro data, there will be the U.S. ISM manufacturing PMI on Monday, the ADP nonfarm employment change and ISM non-manufacturing on Wednesday, jobless claims and factory orders on Thursday, as well as the biggest event of the week — nonfarm payrolls on Friday.

Market consensus is calling for the February employment report to show an addition of 165,000 jobs and for the unemployment rate to stay at 6.3%.