Fed may need more than words in next battle with markets

LONDON (Reuters) - Federal Reserve: 1, bond markets: 0. That’s more or less where it stands after Round One in the tussle over borrowing costs. But Round Two, and perhaps even Round Three, are inevitable, and they may require policy action rather than just words.

The selloff was driven by concerns that adding enormous buckets of government spending to a fast-recovering U.S. economy would push inflation above the Federal Reserve’s target sooner than anticipated.

In theory, that would force the Fed’s hand in raising interest rates, wiping out investors’ bond market returns.

Reiterating such messages, alongside interventions by smaller central banks such as Australia and South Korea, calmed bond markets. Bets on early-2023 Fed rate hikes have ebbed.

Graphic: Calm returns to bond markets but for how long? - 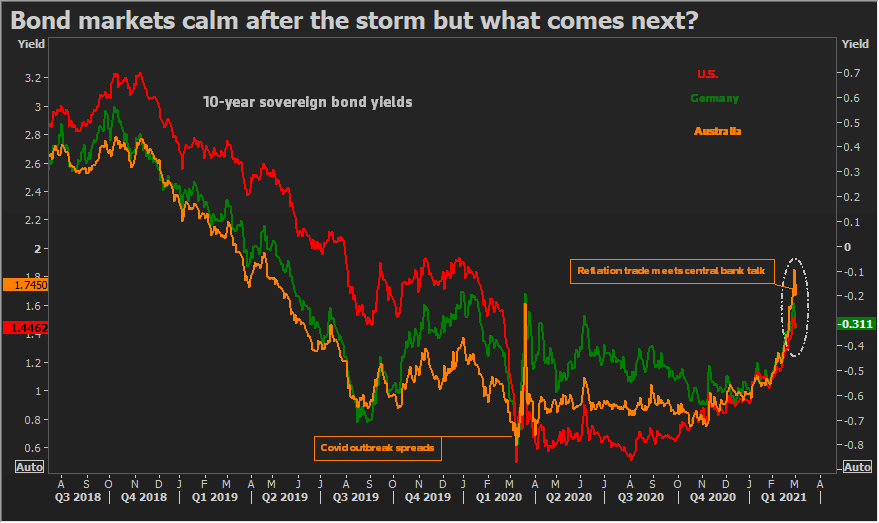 But perhaps markets are regrouping before another assault.

“Fed members have signalled they are not worrying, so the bond market is saying: ‘If this is not your pain point, we’re going to find out what is’,” said Matthew Miskin, co-chief investment strategist at John Hancock Investment Management.

Markets facing off against central banks is nothing new and the old adage “Don’t fight the Fed” still holds. But market clout has grown too. 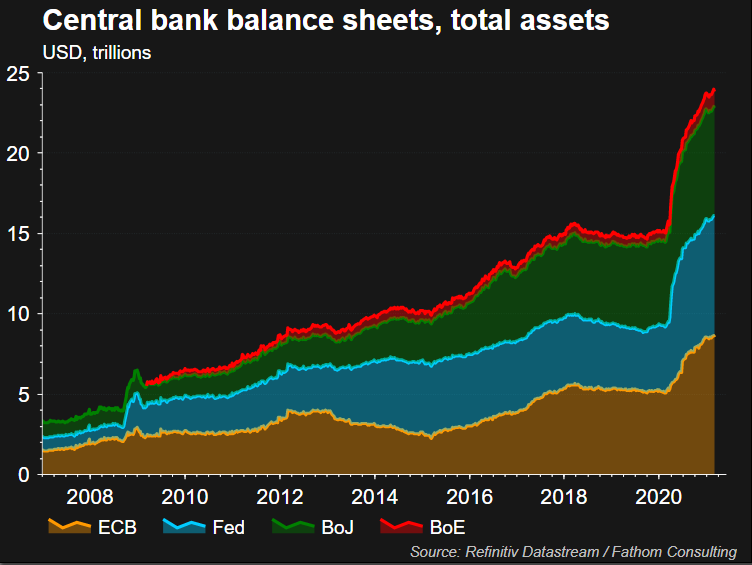 Central bank stimulus that crushed borrowing costs to below inflation has fed an equity bull run that has added $64 trillion to the value of global stocks since 2008. Higher yields would put that entire edifice at risk.

The shifting power balance became evident in 2013 when a market tantrum forced the Fed to backtrack on plans to start withdrawing stimulus. Another market revolt erupted in late 2018, egged on by then President Donald Trump. The Fed soon pivoted from raising rates to cutting them.

So markets have seen this movie before.

But this time there is a plot twist: Central bank stimulus, aimed at lifting growth and inflation, has helped boost stock and bond prices, but now government spending on top of that could fuel price pressures - which hurt bonds and stocks.

Salman Ahmed, head of global macro at Fidelity International, expects another selloff when the $1.9 trillion stimulus starts to trickle through the U.S. economy.

Yields 25-40 bps above recent highs would worry the Fed, he believes, adding that words won’t placate markets next time. Instead they may want bond-buying increased or Japan-style yield curve control (YCC) to stop borrowing costs rising above a set level.

“This was probably one of the first market tantrums,” Ahmed said. “If it happens again and again, the Fed will have to go for YCC.”

What happens in sovereign bond markets matters because higher yields here raise borrowing costs for companies and households. As capital flow slows, so does economic growth.

And higher yields are harder to stomach in a world that has racked up an additional $70 trillion rise in debt since 2013.

The European Central Bank, fearing the impact on the bloc’s anaemic economy and inflation, warned investors not to push yields too high, unless they want to fight its one trillion-euro war chest. 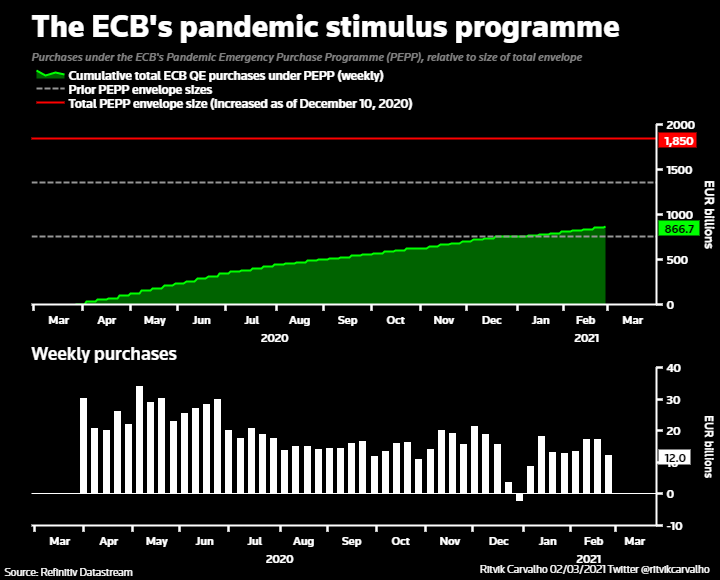 AXA Group chief economist Gilles Moec said the ECB had been economical so far with its emergency bond buying scheme, so “there is plenty of dry powder to resist market pressure.”

Economists suspect it has already escalated bond-buying, leading to yields falling back this week.

Fed action, though, may be triggered only by a prolonged rout which hits companies and lifts mortgage rates.

“It would be some combination of interest rates, equities, the dollar and corporate spreads,” said Ritchie Tuazon, fixed income portfolio manager at Capital Group.

Graphic: US mortgage rates picking up, not surging yet - 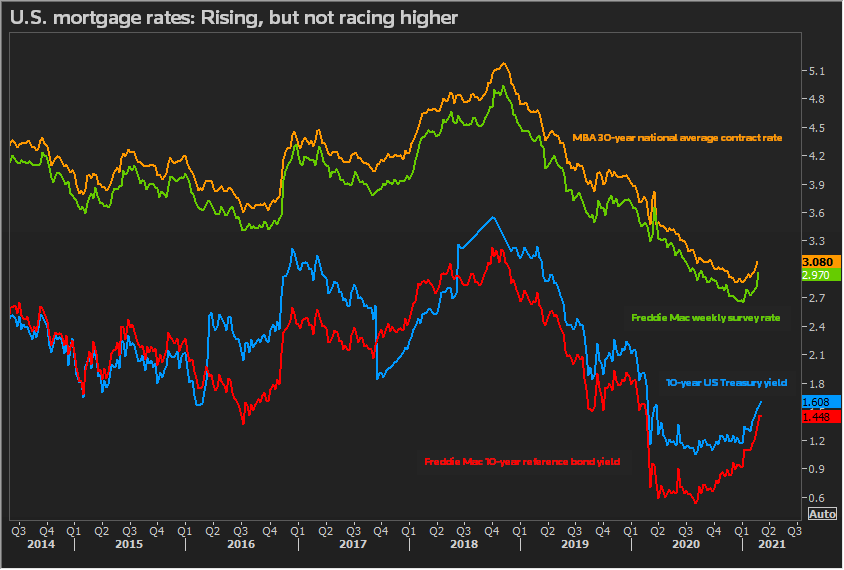 A test could come next week when the U.S. Treasury auctions three- and 10-year bonds, following a recent debt sale that saw lacklustre demand.

But what investors want to see is how much additional Treasury borrowing will be needed when the fiscal stimulus package goes through.

“As we do more stimulus, we will issue more U.S. Treasuries, so if the Fed doesn’t increase quantitative easing they are in essence tapering,” Miskin of John Hancock said.

The other trigger could be robustly improving U.S. economic data, especially employment figures.

“We are still in the winter of economic discontent, and in a few quarters we’ll be in the summer of economic euphoria,” said David Kelly, chief global strategist at JPMorgan Asset Management. “Which means that rates go higher.”