LONDON (Reuters) - Sterling steadied against the dollar on Wednesday and gained against the euro after the announcement of an expansive budget designed to prop up the British economy as it prepares for a re-opening from lockdown.

The pound traded at $1.3964 by 1341 GMT, largely unchanged, after British finance minister Rishi Sunak delivered an annual budget speech in which he announced a costly extension to emergency aid programmes and tax hikes for businesses.

“Looking at the performance of sterling over the period of the budget suggests that the detail, most of which was widely trailed, had little material impact upon GBP,” said Jeremy Stretch, head of G10 FX strategy at CIBC.

“We have seen gilts come under a little pressure as the gilt remit, borrowing levels for 2021/22 are higher than expected. Near-term risk dynamics are as important for GBP as anything the Chancellor may have announced.”

Sterling is the best-performing G10 currency this year, up about 2% versus the dollar, as investors bet the speed of Britain’s vaccination programme will enable a faster reopening of its economy, which has suffered its worst annual contraction in 300 years.

“Overall, the additional fiscal support announced should underscore the constructive outlook for GBP for 2Q, with further fiscal help facilitating the economic rebound and making GBP the outperformer in the G10 FX space,” strategists at ING said in a note. “We expect GBP/USD to breach the $1.5000 level in 2H21 and dips below $1.4000 should be faded.” 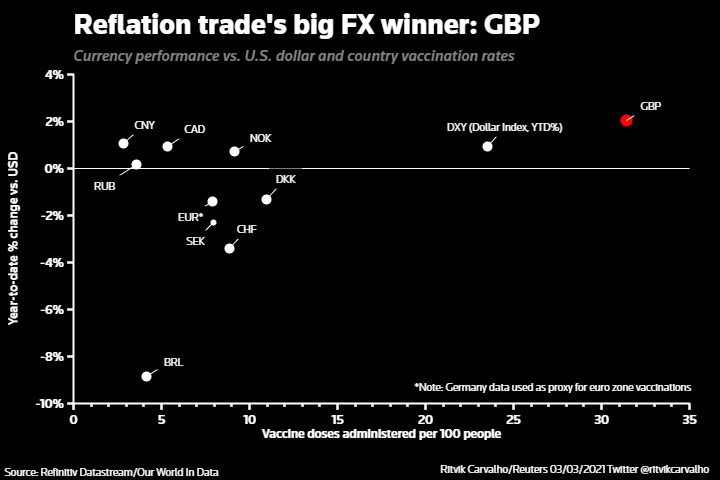 Relief over a last-minute Brexit trade deal signed with the European Union last year and a Bank of England that has pushed back market expectations of negative interest rates has also been beneficial for the pound, which last week hit its highest in two and a half years.

Sunak said the economy will regain its pre-pandemic size in the middle of 2022, six months earlier than previously forecast, helped by Europe’s fastest COVID-19 vaccination programme.

But it will remain 3% smaller in five years’ time than it would have been without the damage wrought by the coronavirus crisis, he said. Extra support is needed now as the country remains under coronavirus restrictions.

Valentin Marinov, head of G10 FX research at Credit Agricole, warned that a premature withdrawal of fiscal support for the economy could slow and even derail the recovery at a time when post-Brexit uncertainty lingers and clouds the outlook for the services sector.

“To the extent that this also makes the BoE more cautious and thus more willing to push against any further tightening of the UK financial conditions, it could also hurt the GBP,” Marinov said.

“We have two MPC doves - Tenreyro and Haskell - speaking today and tomorrow respectively. Their comments could become the trigger for a more sustained correction lower of the overbought and overvalued GBP.”

Silvana Tenreyro, a member of the BoE’s rate-setting committee will be speaking at 1600 GMT.

After the budget announcement, money markets reflected a 10- basis-point increase in the Bank’s base rate by September 2022, according Refinitiv data.