Brutal March? Gold price at risk of a flash crash to $1,600 - analysts 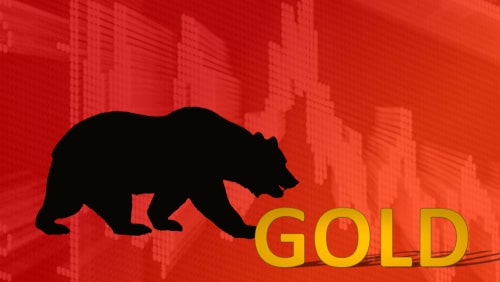 (Kitco News) The first week of March was a damaging one for gold as prices broke through the psychological level of $1,700. Now, the key question on everyone's minds is just how much lower can gold drop before bottoming out?

Down more than $200 since the start of the year, gold investors are looking for the magical line in the sand that will signal the end of the downtrend. At the time of writing, April Comex gold futures were trading at $1,699.10, down 2.8% on the week.

The main culprit has been the rising U.S. 10-year Treasury yield, which has triggered a stronger U.S. dollar that is weighing on gold. And this week's Federal Reserve Chair Jerome Powell's message that largely ignored inflation concerns and rising yields did not help.

"Powell's failure to push back on the recent rise in bond yields took away the luster of holding gold. It has provided a short-term bullish outlook for the dollar, which is weighing on gold. We are going to have a week and a half of no comments from the Fed, which is their blackout period until the next monetary policy meeting on March 17," OANDA senior market analyst Edward Moya told Kitco News. "We'll see the bond market run free. Right now, there are some short-term pressures that could keep gold vulnerable."

Markets are worried about the sudden rise in yields. There was an expectation that Powell would hint at some plan to prevent the long-end of the curve from rising further, said Kitco Metals global trading director Peter Hug.

"In response, stocks and the commodity complex as a whole sold off on higher rates and a stronger dollar," Hug said on Friday.

However, analysts still expect the Fed to get involved eventually – most likely when the 10-year yields rise north of 1.75%.

"This will upset this whole idea of stable monetary conditions environment," he said. "What the Fed is looking at is not just yields but the broader financial conditions. Once the central bank makes it clear that there is a red line for the yields, we could see gold do better."

'Gold is at a critical point'

As the focus remains on the rising yields and the dollar, what does it mean for gold in the short-term?

Gold could be looking at the $1,685 level next week, which should hold, according to Hug. "Gold is at a critical technical if you follow the Fibonacci indicators," he said. "I expect a bounce here from a technical perspective – gold to close and trade $1,700 next week, which is a psychological level. The $1,725 is the next level of resistance, followed by $1,750."

However, there is a clear risk of a drop towards $1,660, and even lower, Melek pointed out, citing the need for the Fed to clarify exactly when and under what conditions could the central bank intervene to control the yield curve. "Good economic numbers next week could make the low-1600s a zone rather than a hard stop," he said.

If key support levels don't hold, gold could see a flash crash to $1,600, added Moya, noting that this would be a likely bottom.

"I anticipate that right now we could see $1,600 – a flash crash. But that is also where the buyers would strongly emerge. This will be an attractive buying point for many institutional investors," Moya said.

Hug is still constructive on gold in the medium-term, adding that the fiscal stimulus is not going away any time soon with the Fed not planning to reverse policy until 2022. "If the long-end of the curve continues to ratchet higher, the Fed will create action to bring it under control," he noted.

Melek is also optimistic on gold towards the end of 2021, noting that prices will be significantly higher going into 2022.

"There are massive amounts of debt, concerns about currency devaluation, and the government has no choice but to monetize all that paper. We will have inflation. And once the market gets tuned to that, long positions will return into gold," he said.

Events to watch next week

Economic data will continue to improve next week, and eyes will be on the progress around the $1.9 trillion stimulus package over the weekend.

"Chances are you are going to see a lot of optimism as the outlook continues to improve. We'll start to see Texas reopen, and it will be very positive for the labor market and the economic activity. There is a strong upside for the economic data. That will drive yields higher," Moya said.

U.S. inflation data will also be important next week, with market consensus estimating the annual core CPI number to be at 1.4% in February.

"This week headline inflation is likely to move a little higher primarily due to rising gasoline prices with the annual rate of headline inflation set to head to 1.6% from 1.4% while core (ex-food and energy) stays at 1.4%," said ING economists.

On top of that, the Bank of Canada and the European Central Bank will be making their monetary policy announcements on Wednesday and Thursday, respectively. No significant changes in rates are expected. Traders will also be watching U.S. jobless claims on Thursday and the PPI data on Friday.