Copper price to peak this year, here's why - CRU 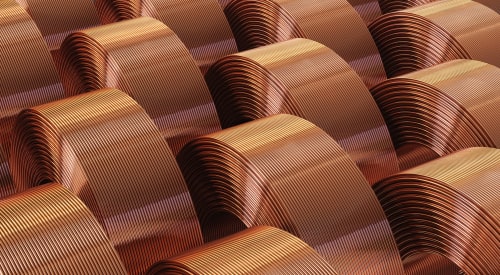 (Kitco News) Copper headlines have been everywhere lately, with the economic recovery and a move toward green technology boosting prices to 9.5-year highs. But that excitement will start to fade, according to CRU director of base metals research and strategy Vanessa Davidson, who is projecting a peak in prices as soon as Q2.

Copper prices traded well above $9,000 a tonne at the end of February on positive vaccine news, which has encouraged expectations of a quick economic recovery, Davidson said on the sidelines of Prospectors & Developers Association of Canada (PDAC), which is virtual this year.

However, as more copper projects begin to come online, the price will get dragged lower into 2022, she told Kitco News.

"Our expectation is that prices will drop next year. We see a peak in copper prices in the second quarter of this year, and then we expect to see prices coming off a little bit," she said. "The supply from the new products will start hitting the market from the second half of the year."

The average price for copper for 2021 is $8,835 per tonne, Davidson pointed out. "This is a huge upgrade from where we were looking a year ago."

February's 9.5-year high of $9,617 has run a bit ahead of the fundamentals, and it does feel like there is some froth, she said. "It wouldn't be a surprise to see a little bit of a correction as time goes on," Davidson stated. "We will see some volatility in the price at this stage."

The good news for investors is that there is a clear bottom for prices. "The general idea is that the prices do need to stay between $7,000 and $8,000 as a minimum because that's where we think the long-term incentive price is for new capacity," Davidson said. "We wouldn't expect prices to drop back below $7,000 over the coming years to encourage enough projects to get off the ground."

The COVID-19 pandemic hasn't been good for copper consumption, and there's been some long-term scarring. But a wave of new fiscal stimulus from around the world has been really supportive for copper.

"The Chinese recovery last year for copper demand was caused by the massive stimulus package. It's similar in other parts of the world as well. It's been very important. And some of those measures have been focused on green technology," Davidson noted.

In 2020, global refined copper consumption fell by 3.3%. That number could have been a lot worse, said Davidson, adding that China recovered quickly due to all of the stimulus being poured into construction and infrastructure, which was good for copper demand. Outside China, world copper consumption declined 8.8% in 2020.

"We saw an increase of 2% in Chinese consumption last year. That did support the global picture," she said.

On top of that, there's going to be a greater reliance on the rest of the world in terms of copper consumption over this decade as China shifts away from the investment-led growth to more of a consumer-model. "We do need some of those other markets in the developed world and emerging markets to start to grow. There is a risk associated with that," Davidson said.

EVs and the green economy will help drive that "rest of the world" demand for copper. "If we hadn't have had growth in EVs and renewables, we would have expected to see global copper consumption plateau beyond 2025. But with EVs, we're expecting to see good growth of about 2% per annum over the next ten years."

The overview of the project pipeline revealed a lot of committed projects in the next three years, but only very few by 2024.

"It's going to be challenging for copper miners to see some of those projects developed in order to meet that supply gap," she said. "There are many challenges that we've seen. The whole de-carbonization issue — if we're looking at reducing emissions, that is going to apply to projects as well. So anybody who's developing a project today is going to need to demonstrate a low carbon footprint. Is that going to cause delays for projects? Very possibly. Is it going to mean something will get canceled? I think that's also a possibility."

There are also problems with lower ore grades, financing, and social licenses.

As copper prices have been rising, some have raised the question of substituting copper with another metal. Davidson pointed out that there is not a lot of evidence of price-related substitution at the moment.

"We normally look at the price differential between copper and aluminum. And we normally say that substitution could occur if the copper price was around three times higher than the aluminum price. And at the moment, it's actually four times higher. So from a price perspective, that is a risk about the substitution. But of course, it's complicated because it's not just the question of the high price. It's a question of is it technically feasible in certain applications to use an alternative material? Sometimes even if it's technically feasible, there are other reasons that prevent it from happening," she explained.

Potentially, aluminum could be used in wind towers, power cables in solar energy systems, EV charging stations, and even electric corridor projects that Germany is building to transport renewable energy.

"It's something to keep an eye on. But at the moment, we don't see scope for a big shift away from copper. If something does go, it could be significant. If you assume a 1% per annum rate of substitution, it amounts to about 250,000 tons. And if we were to lose that every year for a ten-year period, it does make a difference to the numbers," Davidson added.