(Kitco News) - According to the preliminary data released by the U.S. Geological Survey (USGS), global mine rare earth metals (REE) production was estimated to be 240,000 tons of REE oxide equivalent, a 9% increase over 2019 (220,000 tons).

China was again the largest producer of REE (140,000 tons), but contribution of other countries’ mine production was the highest at 42% (100,000 tons) of the total REE production. 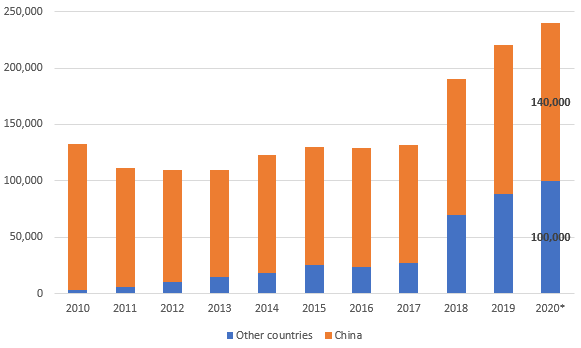 USGS noted that the principal economic sources of rare earths are the minerals bastnasite, monazite, and loparite and the lateritic ion-adsorption clays. The rare earths are a relatively abundant group of 17 elements composed of scandium, yttrium, and the lanthanides.

The elements range in crustal abundance from cerium, the 25th most abundant element of the 78 common elements in the Earth's crust at 60 parts per million, to thulium and lutetium, the least abundant rare-earth elements at about 0.5 part per million. The elemental forms of rare earths are iron gray to silvery lustrous metals that are typically soft, malleable, and ductile and usually reactive, especially at elevated temperatures or when finely divided. The rare earths' unique properties are used in a wide variety of applications.