Can gold price break free of Treasury markets? Analysts zero in on this trigger 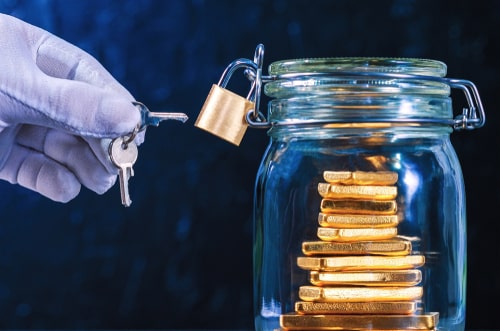 (Kitco News) Has gold found its bottom at this week's 10-month lows? Analysts are waiting to see if the precious metal can hold the $1,700 an ounce level and break free from the Treasury markets' chains.

After plummeting to the low of $1,675 on Monday, April Comex gold futures recovered above $1,730.

On Friday, gold was down on the day but was able to hold the $1,700 an ounce level in the face of higher Treasury yields. The bond market selloff continued after U.S. President Joe Biden signed his $1.9 trillion stimulus bill into law on Thursday. At the time of writing, April Comex gold futures were trading at $1,717.90, down 0.27% on the day.

"The 10-year yields are rising, and the curve is steepening up more. Even the short end of the curve has steepened up. This could continue as we see good economic numbers and talk about inflation. More risk appetite leads to yields shooting up, and it is not a good story for gold," TD Securities head of global strategy Bart Melek told Kitco News. "Precious metals are held hostage by Treasury markets."

The U.S. 10-year Treasury yields surged above 1.6% overnight. "Yields are still in play. We thought $1,675 could be the low in gold. But it all depends on yields and if they continue to rise," said RJO Futures Senior commodities broker Daniel Pavilonis.

The $1.9 trillion stimulus package is also inflationary. "The market is expecting consumers to start going out and buying goods with that money," noted Phoenix Futures and Options LLC president Kevin Grady.

Once everyone will get vaccinated in the U.S., the yield curve will respond, and gold could have a hard time, Melek noted.

On top of that, markets are starting to price in more stimulus measures, including infrastructure spending.

"If money printing, higher yields, and foreign buyers selling our debt is the new M.O., there is more reason to buy emerging markets right now. The stimulus is ultimately a signal to the rest of the world that we are not in good shape, and we wave to pump out more money to bail out governments," Pavilonis said.

Eyes on the Fed next week

The current correlation between yields and gold is that as yields go up, gold comes down. This can change in the future, and once it does, gold can surge higher, Pavilonis pointed out.

The Fed has been largely ignoring the issue so far, which is why all eyes will be on the Fed Chair Jerome Powell next week as he holds his press conference after the central bank's interest rate announcement on Wednesday.

Even the European Central Bank (ECB) came out on Thursday saying that it is concerned about inflation and the printing of money, noted Pavilonis. The ECB said it would use its Pandemic Emergency Purchase Programme (PEPP) to halt any unwarranted rise in debt financing costs.

The ECB President Christine Lagarde "nonchalantly said that higher yields could translate into premature tightening for financing in all sectors in the economy," described Pavilonis. She also noted that the ECB wants to preserve favorable finance conditions with inflation looming down the road.

"If Fed came out and said something similar, that would be bullish for gold … The fact that yields are rising maybe shows the Fed is losing control," Pavilonis stated.

Melek said it is unlikely for Powell to make any significant new comments on the yield curve. "Powell will assure us that it is too early to talk about increasing interest rates. He was pretty ambiguous last time around when the yields moved up sharply, and the risk appetite wasn't hurt," he said.

Powell might attempt "to talk down yields," added Grady.

Also, the markets will get a look at the Fed's updated quarterly projections. And the ING economists are expecting an upward revision to the 2021 GDP.

"There will also be a lot of interest in the Fed Funds rate Dot Plots. Does the Fed 2023 Dot Plot median shift to a 25bp hike? Probably not, but the dollar would probably rally if it did. Yet a largely unchanged FOMC statement and a Jay Powell press conference repeating that the Fed has a long way to go before reducing stimulus should prevent the dollar running too far ahead," the economists said.

It is critical to see how gold behaves next week around the $1,700 an ounce level, according to the analysts. A move towards $1,760 would signal a possible rally to come, while a drop below $1,670 could open the door to $1,600 an ounce, they said.

"Gold may be bouncing around here and consolidating for a move higher; need to get above $1,760 to give confirmation," said Pavilonis. "The $1,670 level is support. If that shakes out, we could be looking at $1,600."

Gold will need to hold $1,700, said LaSalle Futures Group senior market strategist Charlie Nedoss. "I want to see what it does at $1,700," he said.

Melek added that short-covering is very likely in the short-term. But if the U.S. dollar and the yields keep rising, gold could re-test $1,660 an ounce next week.

Grady pointed out that it is dangerous to be short-gold right now, while, at the same time, it is not beneficial to be long-gold either. "To be short gold in the market that has so much money printing and stimulus is dangerous. But every time gold goes up, it is being sold. Traders want to look or trend and ride that trend," he said. "That is why I am neutral."

There will also be a slate of fresh economic data to monitor next week. The data releases will kick off with N.Y. Empire State manufacturing index on Monday and the U.S. retail sales and industrial production on Tuesday.

The U.S. housing starts and building permits are due out on Wednesday, followed by the Philadelphia Fed manufacturing index and jobless claims on Thursday.