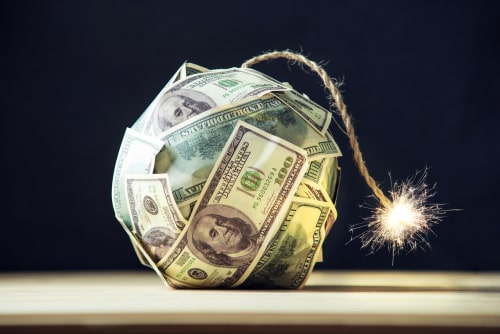 (Kitco News) With so much debt in the U.S., financial markets are entering a new paradigm, where we could see "shocking" tax changes that might involve prohibitions against capital movements to assets like gold, bitcoin, and other tax jurisdictions, said Bridgewater Associates founder Ray Dalio.

"Because I believe that we are in the late stage of this Big Debt Cycle … I believe cash is and will continue to be trash (i.e., have returns that are significantly negative relative to inflation) so it pays to a) borrow cash rather than to hold it as an asset and b) buy higher-returning, non-debt investment assets," Dalio wrote in a LinkedIn post.

Tax changes will play a massive role in dealing with the debt problem going forward, he elaborated. And more importantly, there might be restrictions in terms of where investors could move their capital.

"Policymakers who are short of money will raise taxes and won't like these capital movements out of debt assets and into other storehold of wealth assets and other tax domains so they could very well impose prohibitions against capital movements to other assets (e.g., gold, Bitcoin, etc.) and other locations. These tax changes could be more shocking than expected," the founder of the world's biggest hedge fund said.

Dalio's analysis is based on how things have worked in the past and what is happening with debt now.

"I am confident that tax changes will also play an important role in driving capital flows to different investment assets and different locations, and those movements will influence market movements," he said.

As an example, Dalio reminded investors that during the 1930-45 period, the Fed was able to control yields by "outlawing gold and the movement of capital elsewhere."

He continued: "While I want to be short bonds (because they have the most terrible fundamentals), I do know that central bankers can keep cash more terrible, and I do know that they might have to prevent the movement to other storehold of wealth assets and other countries … History and logic show that central banks, when faced with the supply/demand imbalance situation that would lead interest rates to rise to more than is desirable in light of economic circumstances, will print the money to buy bonds and create 'yield curve controls' to put a cap on bond yields and will devalue cash."

"The United States could become perceived as a place that is inhospitable to capitalism and capitalists. Though this specific wealth tax bill is unlikely to pass this year, the chances of a sizable wealth tax bill passing over the next few years are significant. Conflicts can increase in such difficult times when accompanied by large wealth, values, and political gaps, and the environment can become inhospitable to capitalists leading them to run from less hospitable places to more hospitable places," he explained.

This is the new investing paradigm Dalio is talking about, and for him, the solution is "a well-diversified portfolio of non-debt and non-dollar assets along with a short cash position is preferable to a traditional stock/bond mix that is heavily skewed to U.S. dollars."

"The economics of investing in bonds (and most financial assets) has become stupid," he pointed out. "Rather than get paid less than inflation, why not instead buy stuff — any stuff — that will equal inflation or better?"

The COVID-19 pandemic and all the fiscal and monetary policy stimulus that followed created a lot of debt as well as classical signs of bubbles across many assets, Dalio added.

"These circumstances created a lot of government debt—i.e., because there wasn't enough free-market buying of this debt, central banks had to buy it and had to print a lot of money to buy it with—so much so that they drove rates down to 'artificially' low levels, which 'artificially' supported financial asset prices," he wrote. "Now, there's just so much money injected into the markets and the economy that the markets are like a casino with people playing with funny money … You have stocks that have gone up, and you have classic bubble dynamics in so many different assets."