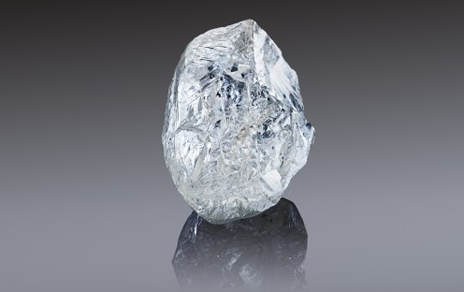 (Kitco News) - Russian diamond mining company ALROSA, the leader of the world's diamond mining industry, today announced that in honor of the 100th auction of large diamonds, the company is putting up for auction one of the largest gem-quality crystals mined by the group since 2000. The last time a lot of such significance was put up for open sale was five years ago.

Evgeny Agureev, ALROSA Head of Sales, commented, "Rough diamonds, which potentially allow for cutting a diamond larger than 100 carats, are extremely rare in nature. Even less often such gems are traded: according to the law, all rough diamonds larger than 50 carats mined in Russia undergo a state examination for redemption to the state fund. Even when it is possible to put them on sale on the market, we prefer to cut and polish the diamond in-house before. Thus, today we are especially pleased to present this exceptional lot as part of our 100th international auction."

The company added that Dubai viewings will also feature two outstanding diamonds 190.74 and 136.21 carats each and a range of notable diamonds over 10.8 carats.

Under the current legislation, ALROSA sells special-size (over 10.8 carats) rough diamonds at auctions only. The first auction of such kind was held by the United Selling Organization of ALROSA in Moscow in 2003.