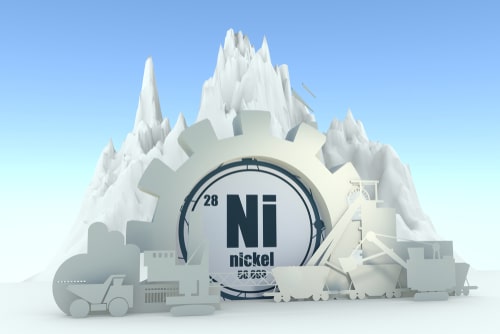 (Kitco News) The security of supply is becoming a key factor for manufacturers, especially when it comes to battery metal like nickel, according to CRU.

Nickel has been making headlines with its massive rally until very recently. Prices neared $20,000 a tonne at the end of February and then suddenly dropped to trade just over $16,000 in March. Just a couple of years ago, the nickel price was substantially lower, trading near the $12,000-13,000 range.

"Its price performed incredibly well through the second half of 2020 and into the start of 2021 until last week. That price strength was there despite relatively weak fundamentals for the market as a whole. The market was in a sizeable surplus in 2020, and we expect that it will remain in surplus for the next few years," CRU principal consultant Alex Laugharne told Kitco News.

The driver behind that rally has also been the metal's fastest-growing segment of demand — the battery sector. While the battery sector has grown rapidly, most new supply has come in the form of nickel pig iron (NPI), which is only suitable for use in stainless steel.

"About 70% of nickel is consumed in stainless steel production. That's been the engine behind how much nickel has been required historically. But since 2015-16, we've seen very rapidly growing demand for nickel in the battery sector," Laugharne said.

Until a couple of weeks ago, there was a growing worry that there wouldn't be enough supply of battery-appropriate nickel products to meet demand, leading to increases in the nickel price despite an overall market surplus. However, after Tsingshan Holding Group Co., the world's top stainless steel producer, announced its decision to convert some of its nickel pig iron (NPI) output to matte – the outlook has changed, and prices plummeted, though they remain elevated compared to levels seen in recent years.

Matte is an intermediate product that can ultimately be processed into battery-grade chemicals. This has opened a door for an alternative methodology when it comes to producing nickel sulfate needed for EVs (electric vehicles) and batteries. While this process isn’t strictly new, the decision nonetheless came as a surprise to the market, which believed that the price for nickel sulfate might not be high enough above NPI to cover the cost of conversion.

The announcement is a major signal to the nickel market that two demand sides (stainless steel and the EV battery market) can be flexible enough to meet each other's demand, Laugharne explained.

"That popped the bubble in the nickel price. The bull story was that there wouldn't be enough nickel for batteries while possibly having too much for stainless steel. But if major producers are willing to convert NPI into matte, then in theory this dramatically alleviates the immediate concern around battery-appropriate nickel availability”

"The EV argument is somewhat undermined if the materials you're putting into the EV have severe environmental impacts, whether that's through carbon emissions or pollution," Laugharne noted.

The issue of reliable supply is becoming a real concern, as can be seen in those recent price increases. And when it comes to battery-appropriate nickel supply, looking to the future production is likely to become increasingly concentrated in China and Indonesia, which already account for a large proportion of nickel sulfate and mined nickel respectively.

"For producers of batteries and EVs outside of those two countries, it potentially leaves them very much exposed to relying on Chinese supply of nickel sulfate in order to meet their requirements. That might not be desirable from their perspective," explained Laugharne.For example, if tariffs are introduced or there is a supply disruption, it could disproportionately impact the metal's price and availability. This is where the geopolitical aspect comes in — companies wanting to see mining and the nickel sulfate production done closer to home. This also has appeal for countries with significant resources of nickel and other key battery metals.

"To what extent can they go further downstream with those materials and turn them into precursors or cells and battery production, and maybe EVs themselves within nickel mining countries. That's attractive from a government's perspective — more jobs, more value-added on the products, and more revenue," Laugharne said. "It diminishes reliance on China."

This kind of thinking has previously been seen in rare earths, but now the argument is shifting towards other metals like nickel as well. "Governments are particularly concerned about ensuring that the supply of critical minerals remains uninterrupted," Laugharne said. "You could see that extending further into battery metals as well."

North America already mines about that much of nickel right now, but some of that material is exported to be refined into finished nickel products elsewhere, some is produced in Cuba and not allowed into the USA due to an embargo, and the remainder is currently used for other applications from stainless steel to aerospace, Laugharne added. Therefore if the region is seeking total self-sufficiency in nickel for the EV sector, this may well need to involve new mines and processing facilities.

What might start to happen in North America and Europe is governments or original equipment manufacturers (OEMs) getting involved to help fill gaps in the middle part of the nickel mine-to-EV supply chain.

The middle part of the supply chain involves the material from the mine being processed into nickel sulfate and then turned into precursors for cells, batteries, and EVs. This part of the chain is largely absent from North America, according to Laugharne.

"Traditionally, mines produce sulfide concentrate, and that would be smelted and refined into nickel metal, which would then go into stainless or other applications," he said. "That flow sheet isn't strictly necessary anymore because we're trying to produce nickel sulfate, not metal. People are looking at novel flowsheet solutions like leaching and pressure oxidation to get to sulfate without needing to first produce nickel metal."

However, the challenge is that if miners try to add that downstream segment, it increases the technological risk and the CapEx costs for these projects, making financing more complicated.

"It's tough for the new nickel mines. That's where we need the involvement of governments and potentially the involvement of automakers in order to make financing more attractive," Laugharne said. "Either governments could provide cheap financing or other assurances that will enable project developers to more easily overcome CapEx problems. If the OEMs can guarantee off-take in some way, it also makes financing more attractive. People are more likely to back a project if they know the material is going to be sold at a reasonably good price."

In China, this sort of battery metal supply chain integration is more commonplace, most clearly in lithium. "There's involvement from major EV producers who have ownership or investment stakes going back up the chain through battery manufacturing, through battery metals, refining, and even up to lithium mines themselves," Laugharne stated.

Outside of China, Tesla might be a potential leader in this area. It recently announced that the company would be a "technical partner" in the new ownership of Vale New Caledonia’s operation, which includes the Goro mine and a processing plant.

"That upstream involvement from a major OEM is a really good sign and will help to fill in that gap between mines and battery-end users at the moment, which makes it hard to get mining projects off the ground and leaves consumers without a local source of supply and therefore heavily reliant on China and Indonesia." Laugharne said.

What this could mean for prices is the possibility of regionalization. "That is no one's base case at the moment, but there is a possibility that if consumers limit the number of suppliers they are willing to use due to ESG concerns, then you may get greater differentiation between regional prices in nickel," he added. For example, the NPI to matte conversion approach involves significantly higher carbon emissions than other methodologies to produce nickel sulfate. Consumers keeping a close eye on their carbon footprint may not want to buy nickel sulfate produced this way.

According to CRU, nickel prices are forecast to steadily trend down towards $14,000 a tonne over the next couple of years.