Space mining is critical for terrestrial mining, here's why 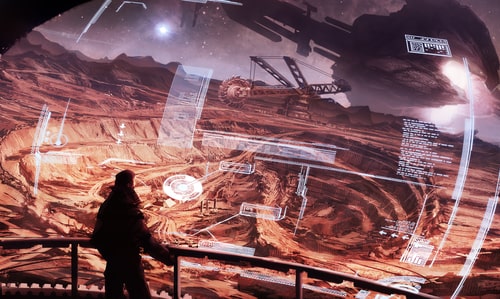 (Kitco News) Space mining and terrestrial mining have a lot in common and the latest developments in the space mining industry offer lucrative opportunities to terrestrial miners that shouldn't be overlooked, according to one industry expert.

NASA has been pouring millions of dollars into early-stage research and development projects, which the mining industry has been neglecting, Deltion Innovations CEO Dale Boucher told Kitco News.

"There's an awful lot of money being thrown into very early-stage R&D that is specific to space mining. For example, the Canadian space agency spent millions of dollars to figure out very small drilling tools," Boucher said. "If we take that R&D money and say to the mining industries that we can adapt this technology to their operations and improve their return on investment, either at an existing mine or a new mine, then it becomes almost a no-brainer."

Today's mining industry does not invest in that early research as much as before because it became much more risk-averse. This is where the space mining industry comes in.

"As you go through the R&D stages, there's an actual point of separation between terrestrial mining and space mining. Space mining looks to get smaller mass, smaller size, lower volume, higher efficiencies, higher autonomy. The terrestrial mining industry wants to scale up. They want to go from kilograms a day to tons per hour. That separation point occurs about halfway through the development cycle of a particular technology or capability," Boucher explained.

This means that miners here on Earth do not need to invest in that primary research because the space mining industry has already done that.

"Miners can leverage those millions of dollars and use that to make small incremental advances in their own operations so that they can improve their productivity and their return on investment (ROI) in a very short period of time," said Boucher. "They need to be able to cherry-pick the things that can make their operation more productive within one or two or three quarters."

One example space mining example that has been applied to terrestrial mining is gravity sensors. "There's analysis systems, which use laser-induced spectroscopy. There is one on Mars right now," Boucher stated. "That's the kind of stuff that the space industry can transfer back to the mining industry, but it takes the mining industry to be agile enough and recognize that there's an opportunity here to be able to begin to adapt that."

The transfer of technology from space to mining is a reality and Boucher has been doing that with his company. "We've taken the drills, and we've adapted it to a small sampling tool for space. You can actually sample in real-time as you're drilling and get the analysis right away. That is the kind of tool that we can provide that directly evolved from the drilling capabilities that we built for the Canadian space agency and for NASA."

There are small rovers that have been built for the space industry that are now being used for remote firefighting operations. "You attach a fire hose to it, and you can send it into a confined space and put out a fire," Boucher described.

NASA's licensed spacesuit technology can allow terrestrial mining workers to operate in up to 60C, and it can provide them with a source of breathing air. "That has an impact in terms of deep mines, where rock temperatures are pushing 50C-60C. And rather than putting in large air conditioning plants to try and cool down the air and the rock, you can simply cool the worker down," Boucher pointed out.

How close are we to space mining?

For NASA, it is much cheaper to figure out how to make rocket fuel on Mars or the Moon than to ship it from Earth. "This is why NASA started looking at where to place the landing site so that you can be within five kilometers of a mining operation, for example," Boucher explained.

And with NASA's Gateway project, which will be a lunar space station that provides vital support for a sustainable, long-term human return to the lunar surface, it is critical to provide oxygen and rocket fuel.

"As they try and keep a long-term human presence on the moon, they have to provide water and oxygen to the human habitat of about 10-100 metric tons a year," Boucher said. "And the easiest way to do that is to mine the water from the moon, which is within the first two meters of surface."

The Gateway is critical to the Artemis program, which is led by NASA and wants to put boots on the Moon in 2024-25. "That timeline might have slipped a little bit. But in order to realize that, there must be a supply depot with oxygen already in place. There are different options for providing that oxygen. One way to do it is by extracting water and breaking the H2O into oxygen and hydrogen," Boucher said.

To put the space mining's market-value potential into perspective, it is helpful to look at a company like the United Launch Alliance. It is looking to purchase almost $1 billion a year worth of fuel to provide its ferrying service that would run between Earth and the new lunar station.

"That requires 1,600 metric tons per year of propellant. And it's too expensive to bring it from Earth. So they want to buy it from the Moon, and they're prepared to spend almost a billion dollars a year on that. I don't think you're going to have to look too far to see some real ground being gained," Boucher said. "When we start looking at space mining, we're not talking about mining a sulfite ore and smelting it and turning it into gold or platinum or rhodium. We're talking about digging two meters down below the surface, excavating something about the size of a soccer field about 10 inches deep every year in order to generate $1 billion of gross revenue."

The idea of mining rare earth elements in space is interesting not because of the price advantage, but because China controls 90%-95% of the rare earth market, he added. "Rare earth elements are the things that you need for electric batteries, television, computer screens. These are all rare earth elements that are available on Earth but are controlled by China. That's worrying North American interests. That might be enough to look at the business case to actually go and mine rare earth elements from the Moon and return them to Earth for manufacturing."