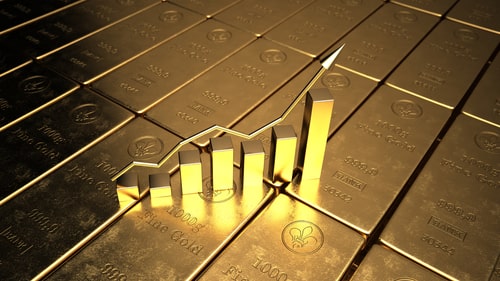 (Kitco News) Gold shot up to a one-week high as it attempted to break the key resistance level at $1,750 an ounce after Federal Reserve Chair Jerome Powell praised economic progress and hinted at potential rollback of asset purchases.

"As we make substantial further progress toward our goals, we'll gradually roll back the amount of Treasurys and mortgage-backed securities we've bought," Powell told NPR's Morning Edition in a live interview. "We will very gradually over time and with great transparency when the economy has all but fully recovered, we will be pulling back the support that we provided during emergency times."

Powell also highlighted that the U.S. economy is recovering quicker-than-expected due to fiscal and monetary stimulus and vaccine progress. This will allow the Fed to taper at some point in the future, Powell said Thursday.

"In a nutshell, it's a combination of better developments on COVID, particularly the vaccines, and also economic support from Congress. That's really what's driving it," he said. "That's going to enable us to reopen the economy sooner than might have been expected."

The Federal Reserve was quick to respond to the COVID-19 pandemic, cutting rates near zero and making $120 billion in monthly bond purchases. On the fiscal side, Congress passed more than $4 trillion in stimulus in the past year.

In the last monetary policy announcement, Powell promised to keep the central bank's accommodative stance in place until the economy reaches full employment and inflation averages around 2%.

During the NPR interview, Powell reiterated that any rate hikes would only be considered "when the economy is all but fully recovered."