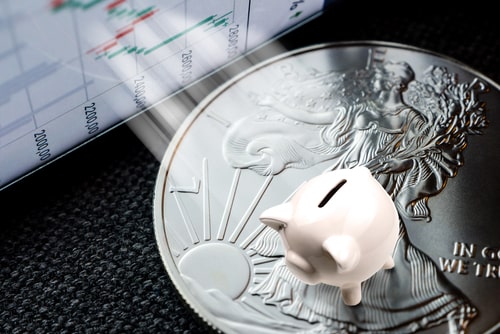 (Kitco News) The markets are entering a "strong era for commodities" and investors shouldn't overlook silver, according to one industry expert.

Silver is known to be a lot more volatile than gold, but the advantage is that in a rally mode it stands to benefit the most out of the two safe-haven metals, Humayun Sheikh, CEO of Mettalex and early DeepMind investor, told Kitco News.

"We are entering a strong era for commodities. Within those commodities, you have gold and silver. Gold is generally the focus, but if you look at silver, it performs a lot more than gold. So is gold changes 1%, silver changes 4%. The volatility is higher. And the returns are generally higher. There is definitely a case that the equity stocks are going down, while silver consumption is going up because of electronics and solar panels," Sheikh said. "Silver, either as a safe-haven or a speculation, is looking good."

At the same time, during the periods of bear markets, silver's drop was not as drastic as its rallies, he added. "From 2011 to 2016, gold went down 45%, while silver went down 70%. The upside in is much higher, and the downside is not so bad."

The case behind the silver argument is the rising industrial consumption, Sheikh pointed out. "The industrial use of gold is going down, but for silver, it is going up. We can see that there is room to grow, and as the consumption increases, silver price rises."

In comparison to gold, silver is undervalued, Sheikh added.

Renewable energy is going to be the deciding factor for silver in the next decade to come. "Looking at the current environment, unless we find something else to replace silver with, the precious metal will take out its all-time highs in the next five to seven years," he said. "We would probably head back to the same levels around $45-$50 an ounce."

The outlook on silver is extremely bright, but there is one major caveat to be aware of, Sheikh highlighted. "Technology is moving so fast that we might not need silver in any of these solar panels or even electronics. We're getting synthetic materials. It is possible that silver could get replaced," he noted.

If the utility of silver is reduced, it's a problem for the metal's price outlook. Silver is not used as much for jewelry like gold, and it is not viewed as the better "safe-haven" metal. "Silver has a long way to go to become a safe haven, and it might never become that," Sheikh said.

Technological developments can happen on two fronts — recycling and replacement. "Silver recycling might become a lot better, which means that the stock levels can start going up. So even if the consumption goes up, recycling means you can actually fulfill that demand without seeing a shortage in silver," Sheikh explained. "And the second thing is if you could find a better conductor than silver for a quarter of the price, then you could easily start replacing silver, which brings consumption down, stocks levels up, and the price down."

Another thing to watch in silver is potential manipulation issues, which recently garnered a lot of attention with the silver squeeze trending online.

"There is an issue about the silver price being manipulatable. The reason is that the market size is very small in comparison to gold. Now, when you're looking at a safe haven, that's one factor, which has to obviously be considered," Sheikh said.

Aside from silver, Sheikh also pointed to steel and aluminum, describing the former as a "very neglected commodity."

"If you look at the industrial construction sector, there has been quite a lull in the last three to five years. We're expecting a big push towards construction, towards building new industrial implementations," he said. "Steel is a very neglected metal. Aluminum is quite an important metal as well, which we have not really focused so much on in recent years."

Sheikh runs Mettalex — a decentralized exchange for commodities, which has a very low barrier to entry and is accessible 24/7.