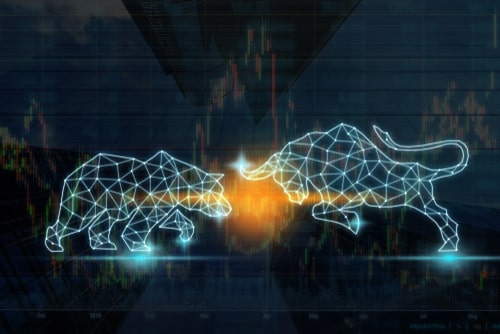 (Kitco News) With gold's bull market stalling, the precious metal looks ready for a nap, and bitcoin could be the main culprit behind this setback, according to Bloomberg Intelligence's outlook for April.

Bitcoin is replacing gold's role in a portfolio for many investors, and until that changes, gold will have to share its spotlight with the cryptocurrency, noted McGlone.

"Unless something unexpected trips up the rising tide of funds heading toward Bitcoin, we see limited upside for gold. The precious metal has … lost primary support -- exchange-traded-fund inflows," he wrote.

Gold's trading range will be stuck between $1,600 and $1,900 an ounce, for the time being, noted McGlone, adding that the precious metal doesn't have a lot of room to either climb or fall.

"[It] is more likely to settle into a cage marked by $1,600-$1,900 an ounce. Something significant may be required to sustain it above the old highs and good resistance since October at about $1,900," he said.

At current levels of below $1,700 an ounce, gold appears oversold and could easily recover back above that key level.

"Gold is a bit too cold in March, it is more likely to recover, but we see the metal settling into an extended rest period," McGlone said. "Upside is limited by good resistance and relative new-comer Bitcoin. Below $1,700 an ounce should find layers of support and improving relative values, on the back of the about 20% discount from the peak."

And even though the gold bull market is dormant for now, the bear market is unlikely, added McGlone.

"The metal's upward trajectory, which resumed with the first Federal Reserve rate hike in 2015, is being threatened by new-comer Bitcoin, but having corrected about 20% from its 2020 peak and backing into layers of support, probabilities are tilted toward a gold-price recovery," he noted. "The bottom band at about $1,650 an ounce is good support and the 50-week moving average around $1,830 is initial target resistance."