Gold price could double in 5 years, here's why yields are not a problem 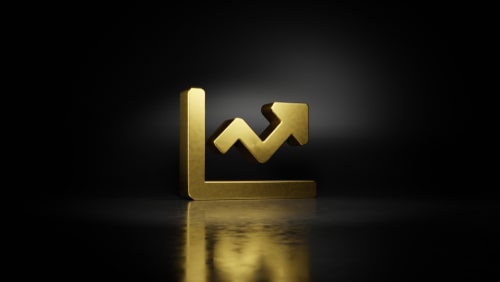 (Kitco News) The best is yet to come for gold as the precious metal could start rising along with its biggest obstacle — the 10-year Treasury yields — once inflation kicks in, according to one industry expert.

"One of the main drivers for gold demand is a hedge against inflation," Guardian Vaults business development manager John Feeney told Kitco News." Inflation usually comes about after a rapid increase in the money supply. That's exactly what we saw in 2020 — an unprecedented expansion of the money supply globally last year."

So far this year, gold has unperformed as the U.S. Treasury yields climbed, pushing the U.S. dollar higher and the yellow metal lower. But that does not mean this correlation is a permanent one for gold, Feeney pointed out. "There is no economic law that states bond yields and gold cannot rise at the same time," he said.

Looking back, the inflationary period of the 1970s stands out in terms of gold and 10-year U.S. Treasury yields rising at the same time.

"From 1972 to 1982, the yield on U.S. 10Y Treasuries rose from 6% to 15%, the Federal Reserve cash rate went from 5% to 20%, and Gold rose from $50 an ounce to above $650 an ounce in the same timeframe. That's over 1,000% returns for gold in $USD despite the dramatic rise in interest rates and bond yields," Feeney noted. "During the 1970's President Nixon wanted strong economic growth and low unemployment at any cost and was not concerned about rising inflation. The sharp jump in the money supply is what preceded a runaway inflationary period."

Investors can't forget that the 1970s also marked the end of the gold standard, which contributed to the rise in prices.

Right now, markets are fixated on gold's negative correlation to rising yields, but it won't last as inflation kicks in, added Feeney. "If we did see inflation running out of control in years to come, there is almost zero risk in owning gold, as it would have an incredibly high percentage chance of performing well under that environment," he said.

But where is the inflation? And will it be transitory just as the Federal Reserve says? Feeney points to "velocity of money" as the main reason for the delay in inflation. "Money Velocity (the pace at which it changes hands, and is usually an effect of aggregate demand) has been plummeting, as most of the monetary stimulus hasn't flowed through to the broader economy (or bottom 90%)" he said.

This is about to change as Biden's stimulus package works itself through the system into the hands of everyday Americans. "If money velocity has in fact bottomed, and starts to rise from here, then we should all be very concerned with what is to come," he said.

As people begin to spend all the printed money, price pressures will rise, Feeney warned. "As the economy improves and people come out of lockdowns, it makes sense for the velocity of the money supply to increase. And that's the main reason why we haven't seen inflation as for the CPI over the last ten years. We haven't seen the velocity of the money supply. The rate at which money is changing hands has been dropping since about the year 2000."

Inflation could start making headlines as soon as late this year into next year and then into 2023.

"When I look at the market right now, the bond market is clearly pricing in higher inflation over the next few years, whereas the gold market right now isn't. One of those markets is correct and my money would be on the bond market," Feeney stated. "We will see inflation pick up dramatically in the next few years, and I think it will become a problem to the point where central banks have to raise rates to combat it."

And once inflation starts rising, it could accelerate faster than the Fed expects, which would be troublesome.

"The language that's been coming out of the Fed lately has been similar to Nixon in the fact that they say that they're happy to let inflation run above target for a period as well. They're more concerned about low unemployment and economic growth and less concerned about inflation. The current environment is similar to the 1970s. I feel like it could rise a lot further than what they anticipate and a lot further than what they would like to see.

Gold could double in five years

Inflation has been great for gold as investors start to pile into the precious metal. "During an inflationary period, you'll naturally just have a lot of money flow into gold as a hedge. That's exactly what we saw in the 70s," Feeney said. "Inflation can be the number one driver for gold demand if you're in an inflationary period. It allows gold to rise at a much quicker rate than the natural inflation rate."

From a price perspective, gold is currently trading below its 2011 highs. But in terms of all the money that has been created since 2011, "gold could easily double from here," Feeney noted. "It'll take probably at least five years or thereabouts."

Shorter-term, gold does not need inflation to recover above $1,800 an ounce, he added. "We're not going to see a big change in inflation over the next few months. But gold can recover from here purely on a technical basis, given that it's so oversold. It could recover back up to $1,800 on a technical basis."