NEW YORK (Reuters) - Major averages hovered near unchanged on Wednesday, with the S&P closing up slightly after the Federal Reserve released minutes from its most recent meeting that reinforced the U.S. central bank's position to remain patient before raising rates.

The major indexes held near unchanged for most of the day but the S&P 500 briefly climbed to a session high after the minutes, in which Fed officials said it would likely take "some time" for substantial further progress on goals of maximum employment and stable prices.

But the gains were minor and short-lived, as many market participants question the ability to hold off on a rate hike for as long as the Fed has stated.

"We thought we were going to get something new from the minutes of the Fed meeting, we were oddly mistaken on that one," said Art Hogan, chief market strategist at National Securities in New York.

"The Fed has been more transparent all of this year about where they stand and they really are not budging from that stance."

The yield on the benchmark 10-year U.S. Treasury note moved higher late in the session. Still, it remained below a 14-month high of 1.776% hit on March 30. The recent pullback in yields has helped growth names and lifted technology and communication services stocks on the day.

Value stocks, which include economically sensitive sectors such as materials and industrials, maintain a strong lead this year over their growth counterparts, dominantly tech-related firms.

However, a resurgence in demand for tech stocks in recent sessions amid renewed restrictions in Canada and parts of Europe has raised questions over the longevity of the value trade.

For a graphic on 1-year spread between growth and value stocks: 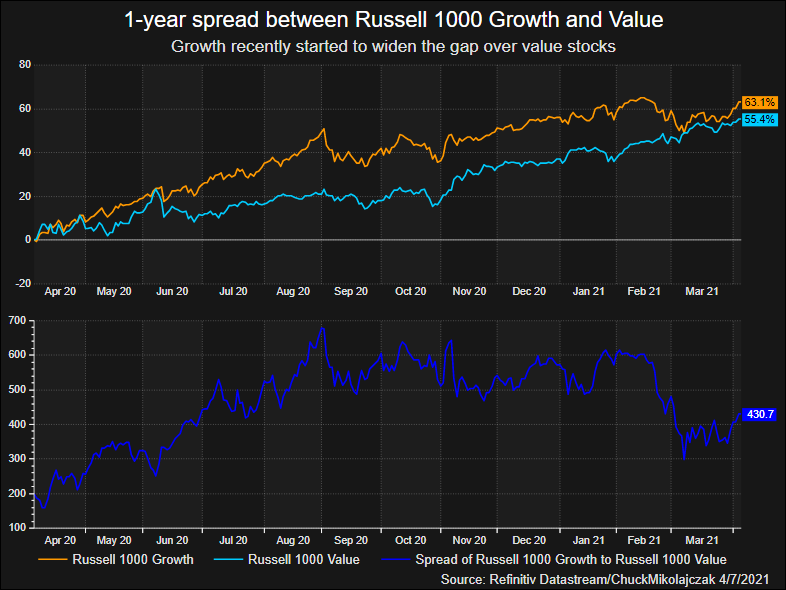 Analysts have raised expectations for first-quarter S&P 500 earnings increase to 24.2%, according to Refinitiv IBES data as of April 1, versus 21% forecast on Feb. 5.

But the sharp run up in earnings expectations could leave the market primed for disappointment.

JPMorgan Chase & Co Chief Executive Officer Jamie Dimon said the United States could be in store for an economic boom through 2023 if more adults get vaccinated and federal spending continues.

ECB can't move in tandem with the Fed, although 'it would be nice' - Lagarde