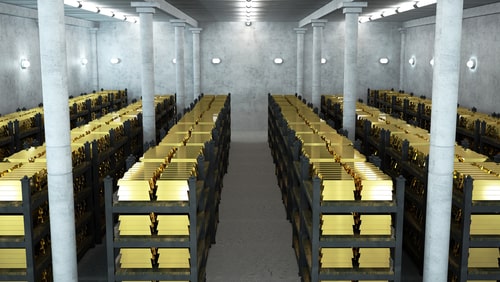 (Kitco News) After a pause in central bank gold buying last year, there are signs of new activity in the space as Hungary tripled its gold reserves.

Hungary’s central bank raised its gold reserves to 94.5 metric tons from 31.5 tons, citing “long-term national and economic policy strategy objectives.” This marked one of the most significant central bank gold purchases in decades.

The official announcement was made in a press release on Wednesday.

“[The central bank] continued the process it started by increasing gold reserves by a factor of ten in 2018. As a result, based on the size of gold reserves, Hungary moved up from the middle of the international list to the top third by March 2021,” the press release said.

The decision to triple its gold reserves was also based on the need to manage new risks arising from the COVID-19 pandemic, the central bank said.

“The appearance of global spikes in government debts or inflation concerns further increase the importance of gold in national strategy as a safe-haven asset and as a store of value. As a result of this decision,” the press release said.

The central bank referred to gold as “one of the most crucial reserve assets worldwide,” stating that “it carries no credit or counterparty risks.”

Hungary’s latest addition was the biggest monthly purchase since June 2019 when Poland bought 94.9 tons, according to the World Gold Council (WGC) data.

This purchase comes just as the WGC released a report saying that global central banks were net buyers of gold in February. Purchases were led by India, which acquired 11.2 tons of gold.

Robust central bank gold buying over the last decade has helped to keep gold prices elevated. But the record-buying spree was paused in 2020 as gold rallied to new record highs and the coronavirus pandemic has shut down economies around the world.

In the third quarter of 2020, central banks became net sellers as some countries chose to sell some of their gold reserves. January and February of 2021 also saw the weakest start to the year in over a decade, with global central bank net sales totaling 16.7 tons, the WGC said this week.

However, this trend seems to be turning around quickly. In March, the Polish central bank said it would be looking into buying at least 100 tons of gold in the future, while Serbia continued to make steady acquisitions since 2019.

“Our expectation remains that central banks will be net purchasers in 2021, but the immediate outlook for central bank demand remains finely balanced,” WGC senior analyst Krishan Gopaul said on Wednesday.