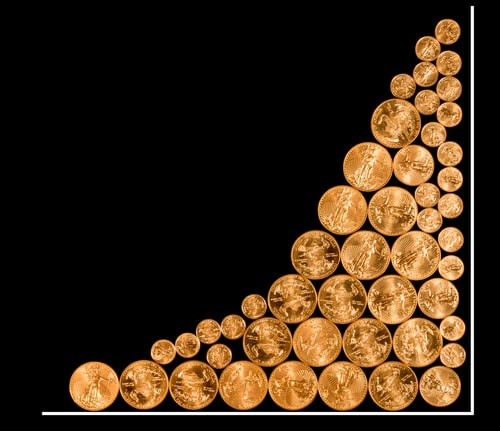 (Kitco News) Even though gold's spot prices are still trading below $1,750 an ounce, the real price of gold is a few hundred dollars higher, according to Ed Moy, former U.S. Mint director and currently chief market strategist at Valaurum.

The true price of gold is what people are willing to pay for the physical metal, including the extraordinary premium investors are currently faced with, Moy told Kitco News when speaking about the unprecedented demand for bullion coins so far this year.

"Part of the confusion in gold is that the spot price of gold remains around $1,735. And it should be higher. But the true price of gold is the spot price plus the premiums that investors are willing to pay for that physical gold. What you do is you add $300 or $350 on top of the spot price. And you ended up with gold currently being around $2,100, which is around the record highs that we saw in August," said Moy, who served as the U.S. Mint director from 2006 to 2011.

The U.S. Mint saw its best start to the year in two decades when it comes to the sale of its popular bullion coins. "It is unusual to have such a strong start. In January, they sold 220,000 ounces of gold bullion coins. That is the best January ever on record," Moy said.

And investors are buying not because the coins are cheap. "If we look at any retailers selling U.S. Mint gold bullion coins, you will find that there is anywhere between $250 and $350 of a premium on top of the gold spot price to buy those coins. So, the price may be low, but because the demand is so high, people are willing to pay an extraordinary amount — 20% above what the market price of gold is — just to get access to the coin."

Moy pointed out that investors are turning to gold coins because of the fear of uncontrollable inflation coming in the future. "You will see inflation come in much higher than what the government's predicting. And if it does run up too quickly, inflation will be beyond the Fed's ability to control."

And the record amount of stimulus is to blame for investors' fear of runaway inflation. "With all that extra monetary and fiscal stimulus, investors are saying that as the money flows through the economy, it is going to cause inflation. The bond markets are also agreeing with these investors," Moy explained.

Even more problematic is that the market might be sending a signal that the U.S. government's stimulus might be the wrong solution for the current problem.

"The market is saying what caused the financial crisis in 2007-08 was a systemic failure. This time around, the economy was in good shape before the pandemic began. Plus, the pandemic is a biological thing that will eventually dissipate, and then the economy is going to come bouncing back. It's a different problem than 15 years ago. And as a result, the solution that the government is advocating right now is the wrong one, and it's like putting gasoline on a fire. And as a result, that is why you see increased interest in gold," Moy stated.

What is causing this disparity between the real gold price and the current spot prices is the impact of different investment philosophies — institutional investors versus the individual investors, Moy noted.

"Individual investors do not have the sophisticated financial tools that institutions do to hedge like various complicated derivatives. An individual investor can't buy securitized mortgages as a way to hedge. What they end up doing is buying precious metal because that's very easily accessible to them," he said.

On the other hand, institutional investors can buy futures contracts on gold, whether short or long. "When you take a look at the gold in Comex, what you've seen is a big jump in the amount of leverage on each ounce of gold. And so, if you see that leverage go from 50 contracts for an ounce of gold to 120 contracts to every ounce of gold, that has an impact on the market that far outweighs one investor buying one ounce of physical gold," he said.

Over time, this will equalize, and the gold market will reach equilibrium — when the spot price of gold equals the current market price of gold.

However, it might take the catalyst of higher inflation to get gold there. "The long-term fundamentals that support higher gold prices are all in place now. And so I believe that there is upward pressure building up on gold. But when will that pop? There needs to be a catalyst. And that catalyst will likely be a sudden and dramatic impact in any of the numbers that contribute to inflation, including the CPI," Moy said. "A catalyst like that would unleash gold prices."

Another very positive sign for the gold market in 2021 is central banks once again buying up the precious metal.

Hungary’s central bank raised its gold reserves to 94.5 metric tons from 31.5 tons in Q1, citing “long-term national and economic policy strategy objectives.” This marked one of the most significant central bank gold purchases in decades.

This purchase comes just as the WGC released a report saying that global central banks were net buyers of gold in February. Purchases were led by India, which acquired 11.2 tons of gold.

One of the key reasons behind their renewed interest in gold is its relationship to the dollar, Moy said.

"When there are fears of inflation and the dollar becomes unstable and performs more poorly compared to other currencies, central banks don't want to hold that. They want to hold something even more stable than that, which is gold. You're beginning to see banks take a look at the U.S. environment, and there are some concerns about the stability of the dollar and the dollar holding its value over time because of the fears of inflation," he explained.