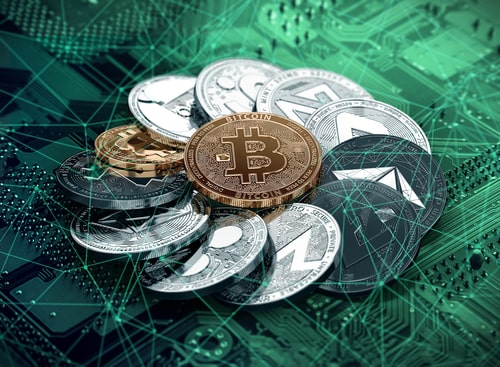 (Kitco News) Coinbase's initial public offering of stock is all the buzz on Wall Street as it marks a major step forward for all digital assets.

This is the biggest such listing to date, with the San Francisco-based company looking at a potential value of $100 billion. This is a massive jump from the company's 2018 valuation of just $8 billion.

Shares opened at $381 early afternoon on Wednesday, which would put Coinbase's value at $99.6 billion. Quickly after opening, shares climbed to $405.05 and then dropped to $369.

"We're still in very early stages. Bitcoin got to a trillion dollars in its first 12 years since its inception, which is the single fastest-growing asset to a trillion dollars ever. We in the industry are very excited to see a stock such as Coinbase trading at a valuation of $100 billion out of the gate," 3iQ CEO and president Fred Pye told Kitco News.

Prior to going public, Nasdaq gave the company a $250 reference price. Coinbase has a fully diluted share count of 261.3 million, according to the latest SEC filing. Direct listing means that employees and existing shareholders are allowed to sell their shares immediately.

Coinbase was founded in 2012 and now has 56 million users around the world. It is estimated to have $223 billion in assets on its trading platform, which is more than 11% of the crypto-asset market share.

The digital asset world went from largely unrecognized to mainstream this year, and Coinbase going public is another step in that direction, the industry experts said.

This public listing is another breakthrough for cryptocurrencies because it marks a broader acceptance and recognition of the space, according to Pye.

"It's extraordinary in terms of showing the impact and the quality of companies in the digital assets space. The digital asset space in its entirety is really moving to the next level of legitimacy. When Coinbase goes public, it'll be worth as much as Goldman Sachs," he said. "Coinbase was really an early starter and a very big leader. We're very excited to see what they've accomplished now."

"Coinbase is on track to be the biggest IPO in history. This means that traditional bankers are buying into the crypto space," Kiguel told Kitco News. "If Coinbase IPO is successful and trades well, you'll see a flurry of other crypto companies going public in the U.S. to fulfill the new demand."

More companies are likely to join Coinbase, including Anchorage, Gemini, and other crypto exchanges and platforms. "There are a lot of main players who will be looking at public offerings in a way to get investors to participate in the companies," Pye said.

In response to the listing, the whole cryptocurrency space was in the green, with many digital coins hitting new record highs. Bitcoin, for example, reached a new milestone as it neared $65,0000, up 120.25% year-to-date.

Coinbase shares are likely to mirror bitcoin closely, and the latter could still have a lot of upside, said Pye.

"Bitcoin had 80-90% corrections three times in its lifetime. This rally has a bit more strength behind it. As long as you have skyrocketing demand for digital assets, something with a fixed supply is not about to fall," he said. "When people say that Elon Musk has allowed people to buy Teslas with bitcoin. It's actually the opposite — Musk is buying bitcoin using Teslas. He's using a depreciating asset to buy an appreciating asset."

Many have compared bitcoin to gold, calling it a new safe haven and a hedge against inflation. Some analysts even blamed bitcoin for stealing gold's luster this year. The precious metal saw its worst quarterly performance since the end of 2016. At the time of writing, gold continued to trade below its crucial resistance level of $1,750 an ounce, down 8.66% since the start of the year.

Coinbase going public is likely to add to the bitcoin versus gold competition, said Pierce Crosby, head of TradingView U.S.

But many gold and crypto experts don't like pitting the two assets against each other, referring to them as complimentary.

"They are both hedges against irresponsible money printing. Both assets will become important. I believe investors should own both," Pye said. "I don't think it helps bitcoin ecosystem to say bitcoin is better than gold. Both of them have extraordinary properties, and both should be in a diversified portfolio. We have to embrace technology and tradition as well."

The thesis for owning gold and bitcoin is the same, and both will be winners if inflation gets out of control, said Kiguel.

"Gold bugs look to the long history of gold. Bitcoiners argue that bitcoin is the new age gold because it's digital and far more portable. My view is that traditional investors will stick with gold and that millennials will go with bitcoin. If the trillions being printed by the U.S. government creates massive inflation, both gold and bitcoin should win the competition against the U.S. dollar."

Gold's weakness this year can be traced back to the moves in the U.S. dollar and yields, said RBC Capital Markets commodity strategist Christopher Louney.

"Linking gold and bitcoin in the public discourse has been a bit over-exaggerated. Their relationship to date doesn't really support the idea that there are complete substitutes. There is obviously an overlap and investor psychology amongst some of the investors in both of them," Louney said. "In the future, they will probably compete on the margin for some dollars, but over the longer term, they may be more complementary assets."