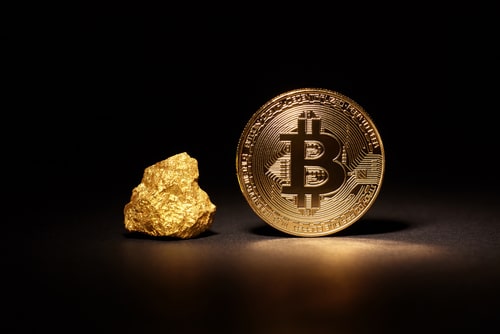 This development is right at the heart of the bitcoin versus gold debate.

"In a world going digital, we believe gold symbolizes the diminishing potential for sustained commodity-price advances, notably vs. bitcoin," said Bloomberg Intelligence in a note to clients. "The crypto is a prime example of how advancing innovation suppresses commodity prices."

GLD tracks gold spot price and uses gold bars held in London vaults. In comparison, GBTC owns and tracks bitcoin. So far, it has closely mirrored the price of bitcoin but tends to over or underperform depending on investor sentiment.

And in just a few months, GBTC could overtake GLD in terms of assets under management, Bloomberg Intelligence senior commodity strategist Mike McGlone pointed out.

"Assets in the Grayscale Bitcoin Trust (GBTC), the dominant on-exchange vehicle, are set to pass funds in the leading gold-ETF tracker (GLD) in a few months," he said.

#Bitcoin Trust on Track to Surpass World's Largest #Commodity ETF -
In a world going digital, we believe #gold symbolizes the diminishing potential for sustained commodity-price advances, notably vs. Bitcoin. The crypto is a prime example of how advancing innovation suppresses pic.twitter.com/3Q3FgiURSs

The popular cryptocurrency is now making its way into mainstream finance, with the biggest U.S. crypto exchange Coinbase going public on Nasdaq on Wednesday. In response to the news, bitcoin hit a new all-time high of more than $64,800 this week, rising more than 110% year-to-date.

However, many analysts argue that it is not a binary choice between gold and bitcoin.

"Bitcoin is getting a track record of having similar properties as gold in that when the value of the dollar goes down, the price of bitcoin and gold goes up. And so, bitcoin can be considered an alternative asset from that perspective. And so with inflation fears, there's a greater interest in both gold and bitcoin," Ed Moy, former U.S. Mint director and currently chief market strategist at Valaurum, told Kitco News.

Investors should not forget that bitcoin is only over a decade old, making it more of a speculative asset at this point, Moy added. "There's a role for both. But right now, whatever allocation you allow for bitcoin as an alternative asset, it's really a speculative asset. Gold is much more stable compared to the volatility behind bitcoin. It's still figuring out its market dynamics," he said.

There is also an overlap between investors who like bitcoin and those who opt for gold. Both are looking for an asset that could protect them from the coming inflation following the massive government money printing, said 3iQ CEO Fred Pye.

"They're both hedges against irresponsible money printing," Pye told Kitco News. "At some point, there will be an economic impact due to the money printing that's gone on. I'm not saying that governments shouldn't have done it. But both assets will be important. You don't see people going away from gold. They are diversifying into gold and bitcoin at the same time."

Right now, investors are looking to protect themselves against the risk of runaway inflation, and each generation does it differently, Tokens.com CEO Andrew Kiguel.

"If the trillions being printed by the U.S. government creates massive inflation, both gold and bitcoin should win the competition against the U.S. dollar," Kiguel said in an email. "Gold bugs look to the long history of gold. Bitcoiners argue that bitcoin is the new age gold because it's digital and far more portable. My view is that traditional investors will stick with gold and that millennials will go with bitcoin."