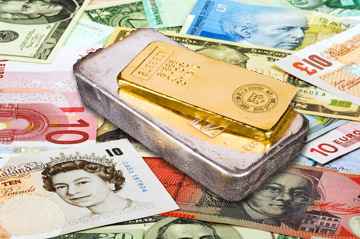 (Kitco News) - Investors should be well-diversified, including holding some bitcoin, as the world faces a global currency debasement threat, according billionaire investor Ray Dalio, founder of Bridgewater Associates.

Dalio participated in a discussion during the Texas A&M Bitcoin Conference Friday, where he highlighted points both for and against the dominant digital currency. Dailo pointed out that 2% of bitcoin holders own 90% of all bitcoin. He also said that there are 21 million coins that can be mined. The market is currently at 18 million and a total of 4 million are presumed to have been lost.

@RayDalio You need a diversified portfolio. If you hold one asset you are over-exposed. Even if it's only #Bitcoin you hold.

Dalio also used history to explain the looming global currency threat. He likened the dollar move to the Dutch & British empires. The fact that a massive amount of printing seemed uncomfortable for Dalio and he referred back to the gold standard on a few occasions.

The threat started when the U.S. moved off the gold standard in the 1970s. One anecdote Dalio mentioned was when he was a clerk on the floor of the stock exchange when Nixon removed the gold standard. He said that he expected stocks to tank. However, he noted that equities did the opposite. He added that later realized that this is because they could now expand the amount of dollars in circulation as it was not governed by a hard asset.

In previous empires, there was always a propensity to print money in times of need, he said. As with the past, this could be the starting point of the current demise, he added.

He also made some valid points about bitcoin saying, "There are 5 billion people on the planet that have no access to banks."

He adding "[Bitcoin] is the only asset where you can walk across the border with 1 billion dollars without batting an eyelid, you cannot do this with gold or diamonds.".

Dalio wrapped up his discussion, saying the dollar has never had a competitor. However, Bitcoin and China's potential new digital currency could be it, especially as the U.S. continues to increase its debt and issue new treasuries.

China holds $1 trillion worth of U.S. debt and if the devaluing keeps taking place, this could be a major catalyst for change," he said.

As for the best way to protect yourself, Dalio said that if there is to be a de-dollarization event, then investors will need to pick a few assets that would thrive in that scenario. Being over-exposed to bitcoin presents its own problems.

Dalio said that Bitcoin should represent about 20% of an investment portfolio.

A few times, it was mentioned that the U.S. government could outlaw bitcoin and how would some people who have amassed wealth in the asset handle such a situation. Dalio said, "there is no one magical thing that will make this work in an anti-fiat cycle. There needs to be diversification."