Gold could drop sharply without an inflation assist - Mickey Fulp 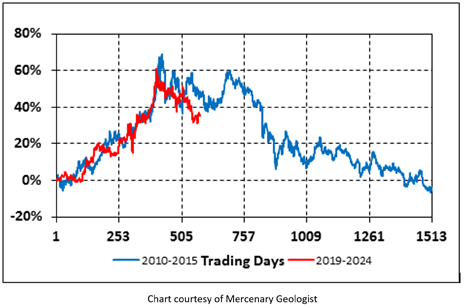 (Kitco News) - Price action in the gold market is playing out eerily similar to what happened in the last bull market and ensuing multi-year correction and one market strategist says that he is neutral on precious metals and recommends taking profits in base metals.

Mickey Fulp, creator of the Mercenary Geologist Newsletter, said that he is concerned that there is still more downside for gold as the precious metal's price action looks even worse than the correction that happened after gold hit its previous all-time highs in 2011.

In his latest market research, Fulp's team tracked the gold's price action over 1,500 trading-day period from 2010 to 2015. He overlayed that with the latest price movement from 2019 to now. He added that he got the idea track the two gold bull markets from Gary Wagner, editor of TheGoldForecast.com who also highlighted the same pattern at the start of the year.

"We're less than 40% into this time period. But the pattern is pretty compelling and actually gold is performing worse with lower lowers and lower highs," he said.

Fulp's comments come as gold prices continue to push higher to within striking distance of $1,800 an ounce. However, Fulp said that he is not convinced that gold is ready to break out.

"I'm neutral on gold until it goes above its 200-day moving average," he said. "About 10 months ago said that I was selling some of my positions because I saw something coming and sure enough, that has happened."

While Fulp is sitting on the sidelines in the precious metals market, he said that he is outright bearish on base metals. He added that gold typically leads base metals, which means the multi-year highs in copper and aluminum are not sustainable.

"I am mostly selling stocks in copper and uranium. Copper has just gotten way ahead of itself," he said. "I like to take profits when opportunities present themselves."

Athough Fulp is not very optimistic gold, he added that he does see one factor that would save the precious metal, out of control inflation.

He explained that the difference between 2010 and 2015 is that inflation never materialized after the 2008 great financial crisis. However, he added that the environment feels a lot different.

"Because of all the government stimulus, people got money to spend like and they are spending it." he said. "You just have to look at the housing market. Prices are going up like crazy.  Inflation is going to be the wild card and that could be a reason to be bullish on gold."