ECB can't move in tandem with the Fed, although 'it would be nice' - Lagarde 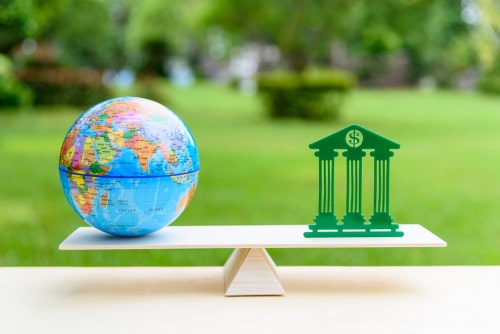 (Kitco News) The U.S. and the EU are not on the same page when it comes to economic recovery and inflation expectations, said European Central Bank (ECB) president Christine Lagarde.

The two different recovery paths mean that the ECB will not be able to mirror the Federal Reserve's actions when it comes to tapering.

"Don't take me literally, but it would be nice to move in tandem with the Fed because that would mean that our inflation numbers are aligned. Clearly, Fed's dual mandate is 2% inflation with employment. We are close to below 2%. But if you look where the Fed is and where we are. And when you look at expectations in the U.S. and expectations in the euro area. We are not on the same page," Lagarde said during the press conference, which followed the ECB's latest monetary policy decision.

Euro zone inflation jumped in March, but it remains much lower than its American counterpart. Inflation in the 19 countries sharing the euro saw an uptick to 1.3% in March on an annual basis from February's 0.9% figure.

In comparison, the U.S. inflation accelerated to 2.6% on an annual basis in March from February's 1.7%. This marked the highest year-over-year gain since August 2018.

In terms of GDP growth, the euro area saw a decline of 0.7% in Q4 2020. And Lagarde said that the incoming economic data suggest that activity may have contracted again in Q1. The ECB president did note that there is a chance for growth to resume in the second quarter.

In contrast, the Bureau of Economic Analysis reported that in the U.S., the Q4 GDP increased 4.3%.

Lagarde's comment was in response to a question of whether the ECB would follow the Fed's footsteps when the time comes to taper.

Given the two different outlooks, "we will not operate in tandem with the Fed," Lagarde added. "That is very much a given. It is not me looking into a crystal ball. It is where we are."

More specifically on inflation, Lagarde said: "Headline inflation is likely to increase further in the next few months, but some volatility is expected throughout the year reflecting the changing dynamics of temporary factors. These factors can be expected to fade out of annual inflation rates early next year," she explained. "Underlying price pressures are expected to increase somewhat this year owning to short-term supply constraints and recovery of domestic demand, although they remain subdued overall, in part reflecting low wage pressures in the context of economic slack and appreciation of the euro exchange rate."

Lagarde projected that the euro area economies could return to pre-pandemic levels in the second half of 2022 but noted that there would be divergencies.

The ECB kept its interest rate and pace of purchases unchanged on Thursday. "The Governing Council will continue to conduct net asset purchases under the pandemic emergency purchase programme (PEPP) with a total envelope of €1,850 billion until at least the end of March 2022 and, in any case, until it judges that the coronavirus crisis phase is over," the ECB statement said.

Going forward, medium-term risks remain more balanced, Lagarde noted, describing better prospects from global demand and vaccinations being contrasted with the ongoing risks from the pandemic and the spread of virus mutations.

Lagarde also warned against premature withdrawal of fiscal support, which would delay the recovery and have scarring effects. She noted that that fiscal and monetary policies "complement each other" and "are not substitutes."

Another key point mentioned was that the ECB did not discuss any phasing out of PEPP, noting it was premature. "Any determination concerning the pace of purchase under PEPP is not done on a calendar basis, it is data-depended," Lagarde said.

The ECB looks at a combination of financing conditions as well as the inflation outlook to determine the pace of purchases. "This is what we have done this time around. We will do it again in June," she added.

Back in March, the ECB increased the pace of purchase in order to ensure broadly stable financing terms.

Lagarde also noted the ECB is not doing yield curve control. Instead, it is maintaining favorable financing conditions. "We don't only look at bond yields, whether real or nominal. We are seeing broadly stable conditions overall whether it is bond yields, or corporate or household interest rates."

The ECB president ended the press conference by saying that the euro area still has a long way to go before crossing the bridge of the pandemic. "We have two crutches - one fiscal, one monetary. And have to be on solid ground before we can walk by ourselves on a sustained basis."