Once again, the gold market is mourning the loss of another industry leader and titan with the passing of Peter Hug, global trading director at Kitco Metals.

Hug passed from cancer Monday evening at his home in Arizona at the age of 69. Hug joined Kitco's leadership team in February of 2010 as director of global trading and risk management and was director of Kitco Hong Kong operations.

Bart Kitner, president of Kitco Metals Inc, said that Hug played an integral role in the company's evolution and growth in the last decade.

"Peter was arguably one of the most knowledgeable and experienced precious metals traders in North America and probably beyond. He was well known and well respected in our industry. I always felt proud that Peter chose to represent Kitco in the last 11 years of his career. He was an icon. One who will be widely missed and fondly remembered," said Kitner. "Peter was passionate about his work and always concerned for the well-being of the people in Kitco."

John Dourekas, director of Kitco Media, said that Hug was an invaluable asset who helped develop Kitco News through his regular commentaries and interviews.

"Today, I am mourning the loss of my dear friend Peter Hug," said Dourekas.

"Peter was a genius businessman; he had tremendous depth and breadth of knowledge about the way markets and the precious metals industry worked. His leadership style was candid and reality-based; he was also the hardest worker in the room. Peter would wake up at 4:00 am to start his busy day, checking the markets, writing his commentary, trading, working on numerous projects, and being the last one to log out late in the evening after meeting with our Hong Kong office. He also liked to play hard — extremely competitive softball player, golfer, an avid outdoorsman. He enjoyed hunting, fishing, and camping," he added.

"Peter had many strengths, the one I respected the most was his ability to make you step out of your comfort zone to take on new challenges. He wasn't only cheerleading; he was in the trenches with you, questioning every assumption and sharing his knowledge and what he has learned while having fun all the way. He loved his job; we would talk about everything and anything, always enjoying life and having a good time. It was a privilege to know him, to be his co-worker and close personal friend," Dourekas said.

While many are familiar with Hug's insights and views on financial markets, Michael Checkan, chairman and CEO of Asset Strategies International, said that Hug's passion for precious metals goes back more than 40 years.

"I am deeply saddened by the passing of my dear friend, Peter Hug… or, as I like to call him, Huggy Bear," Checkan said in a statement to Kitco News.

"I first got to know Peter in the 1960's, when we were young and strong exchange traders and precious metals dealers. We both loved the excitement of the business, with Peter working for Guardian Trust Company (Canada) and me with Deak-Perera. Afterward, Peter got into the independent contractor business.

"I really got to know Peter better when he worked for me at Guardian Safe Deposit Company in Arlington, VA.

"Peter was an avid outdoorsman who loved fishing and hunting. I still fondly remember taking a fishing trip on a lake on an Indian reservation, where he introduced me to the 'black flies.' We loved to travel, and we spoke as specialists at many investment conferences throughout the world.

"On one of Peter's consulting assignments, he met and fell in love with the love of his life… Kelly. She became his rock, and they lived for a while in South Carolina. They owned and operated a Bed and Breakfast near Niagara Falls.

"Many in the Kitco Family first got to know Peter when he began working with Bart Kitner. I can tell you, Peter loved what he did as Risk Manager. On our last call, the two of us discussed retirement. Peter said he planned to continue working for a few more years, and he gave me a hard time about never wanting to retire. That was a few weeks ago. I sincerely wish he could have continued working for a few more years, at least.

"Huggy, my dear friend, you will be missed," Checkan said.

Hug was well-known to Kitco viewers through his commentary and regular interviews. His feature "For Pete's Sake", drew on his frontline experience acquired over the years to provide a trader's perspective on the market and had a viewership of hundreds of thousands of loyal followers.

Hug was a frequent speaker at precious metals conferences often quoted in the financial media space. His daily note analysis on the precious metals markets was quoted regularly by WSJ, MarketWatch, CNN, Bloomberg, CNBC, and TheStreet.

With more than 40 years of experience, Hug was one of the handfuls of experts who have succeeded through multiple bull and bear cycles on the strength and skills honed during the dramatic fluctuations of the 1980s.

According to associates and colleagues in the precious metals industry, his passing leaves a hole in the sector that will be difficult to fill.

"The service he provided, his wealth of knowledge was really just second to none," said Philip Newman." managing director and founding partner of Metals Focus. "He was a walking encyclopedia. Whenever he spoke, you just had to listen and just take it in. He always knew so infinitely more than anyone else, but he was just humble with it."

But more than his knowledge and experience, Hug is also recognized for his honesty and integrity. Rick Rule, director of Sprott Inc, said that Hug was known for his intellectual honesty. He added that Hug wasn't afraid to be either bearish or bullish on gold and silver.

"When he thought the precious metals prices would go lower, he was completely comfortable telling his audience exactly that. My favorite memory of him was just his candor and the intellectual rigor that he put into his personal discussions and his public speeches around all financial topics."

For many, not only did Hug provide insightful market information, but he was honest with his forecasts.

"He's one of those most trustworthy, straight-up people. He never exaggerated and always spoke with candor and a good sense of humor," said Frank Holmes, chief investment officer of U.S. Global Investors. "He's a great man and honorable man. And I just love doing business with him."

Jeffrey Christian, managing director at CPM Group, said that he will also remember Peter Hug for his sincerity and commitment to providing credible information within the sector.

"Peter was one of those people who'd have substantive, concrete, rational things to talk about," he said.

Hug was also able to pass on his integrity to everyone he worked with. Mark Yaxley, general manager at Strategic Wealth Preservation, said that it was an honor to work with Hug, a true leader in the industry.

"Peter was as genuine a person as you'll ever meet. A 'straight shooter' in the truest sense of the words; a rare commodity in today's world. His old-school approach to teaching and mentoring his younger staff at Kitco resulted in us all being stronger and more competent people," Yaxley said.

A strong guiding principle for Hug since the start of his career was to make the gold market easier to access for all investors. He got his start in gold and silver in 1974, gaining first-hand investment industry experience at Deak-Perera.

From there, he became a senior vice-president of Guardian Trust Company, which became one of the largest international trading houses for precious metals.

Hug had full responsibility for all trading activities of the company. He developed the first precious metals certificate program and the first margin trading accounts for metals on the cash market.

The program allowed investors to own physical gold without dealing with the complication of storing precious metals.

As the gold and silver industry has evolved, Hug's commitment never changed. In the last few years at Kitco, he has helped to develop a new digital gold platform. Vaultchain, created by Tradewind markets, allows investors to buy fractional amounts of gold through a digital platform. The physical gold is stored in vaults at the Royal Canadian Mint.

In 2020, as the precious metals market experienced an unprecedented supply crunch with mints worldwide reducing production because of the COVID-19 pandemic, Hug saw digital gold playing an important role in the market.

Throughout his career, Hug had various key consulting roles in the precious metals and foreign exchange industry. However, he was also the CEO of a microchip identification technology company for livestock and pets that saw a 500% stock appreciation during his tenure.

Hug is survived by his wife and three children.

If you would like to contribute to this article with a message of condolence or story about Peter please send us an email at newsfeedback@kitco.com. 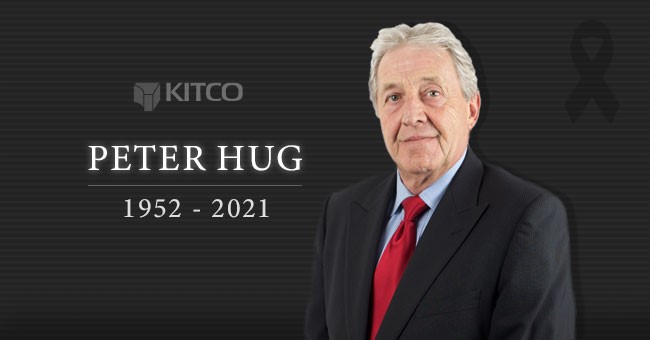