(Kitco News) - Kitco ranked the top 10 biggest gold mines in Africa based on reported production in 2020.

1. Kibali, DRC. 808 koz.
Kibali is the biggest gold mine in Africa, located in the northeast of the Democratic Republic of Congo (DRC), approximately 220 kilometres east of the capital of the Haut Uele province, Isiro, 150 kilometres west of the Ugandan border town of Arua and 1,800 kilometres from the Kenyan port of Mombasa. The mine is owned by Kibali Goldmines SA (Kibali) which is a joint venture company effectively owned 45% by each of Barrick and AngloGold Ashanti, and 10% by Société Miniére de Kilo-Moto (SOKIMO). The mine is operated by Barrick.

2. Loulo Gounkoto, Mali. 680 koz.
The Loulo-Gounkoto complex comprises two distinct mining permits, Loulo and Gounkoto, and is situated in western Mali, bordering Senegal and adjacent to the Falémé River. Société des Mines de Loulo SA (Loulo) owns the Loulo gold mine, and Société des Mines de Gounkoto (Gounkoto) owns the Gounkoto gold mine. Both Loulo and Gounkoto are owned by Barrick (80%), and the State of Mali (20%).

3. Fekola, Mali. 623 koz.
B2Gold’s Fekola mine is located in southwestern Mali on the border between Mali and Senegal, about 210 km south of Kayes and approximately 40 km south of the city of Kéniéba. The Fekola deposit and Anaconda area are hosted in Birimian Supergroup rocks within the eastern portion of the Paleo-Proterozoic Kédougou–Kéniéba inlier, which covers eastern Senegal and western Mali.

4. Geita, Tanzania. 623 koz.
Geita, one of AngloGold Ashanti’s flagship mines, is located in north-western Tanzania, in the Lake Victoria goldfields of Mwanza region, about 120km from Mwanza and 4km west of the town of Geita. It has been in operation as a large-scale mine since the 1930s. The Geita gold deposit is mined as a multiple open-pit and underground operation (since 2016) and will continue to operate as such until the entire economic open-pit Mineral Resource is exhausted. The mine is currently serviced by a carbon-in-leach processing plant with an annual capacity of 5.1Mt.

5. Tarkwa, Ghana. 526 koz.
Gold Fields’ Tarkwa mine is located near the southern end of what is commonly referred to as The Tarkwa Basin, 300 km by road west of Accra, the capital of Ghana. The Tarkwa mine operates under mining leases covering a total area of approximately 20,800 ha. Mining activities around Tarkwa date back to the late 19th century. Gold Fields Ghana operated the underground mine which exploited the Main and West auriferous conglomerates (reefs) of the Banket Series of the Tarkwaian System.

6. Ahafo, Ghana. 480 koz.
Newmont’s Ahafo mine is located along the Sefwi Volcanic Belt, a northeast-southwest trending volcanic belt in Ghana. The mine is in the Ahafo region, approximately 307 Kilometers northwest from the national capital city of Accra.
Commercial production at Ahafo began in 2006. Ahafo has two primary ore zones: Ahafo South and Ahafo North. Mining is currently underway at Ahafo South. In November 2018, Subika, a new underground mine which was completed on schedule and within budget, achieved commercial production, adding higher-grade, lower cost gold production at Ahafo south.

7. Sukari, Egypt. 452 koz.
Centamin’s Sukari mine or Alsukari mine is a gold mine located in the Nubian Desert/Eastern Desert near the Red Sea in Egypt. Sukari is Egypt’s sole gold-exporting mine and the first large-scale modern gold operation in the North African nation. Sukari is a low cost, bulk tonnage open pit and a high-grade underground operation, with significant exploration upside at depth and regionally, within the 160km2 tenement.

8. Tasiast, Mauritania. 407 koz.
Kinross’ Tasiast is an open-pit gold mine located about 300km north of Nouakchott and 162km east-south-east of Nouâdhibou in the north-western Mauritania. Tasiast is advancing the 24k project, which is expected to increase production and reduce costs at the mine.

9. Essakane, Burkina Faso. 404 koz.
IAMGOLD’s Essakane mine is located in north-eastern Burkina Faso, West Africa. It straddles the boundary of the Oudalan and Seno provinces in the Sahel region of Burkina Faso and is approximately 330 km northeast of the capital, Ouagadougou. IAMGOLD commenced management of the Essakane project following the acquisition of Orezone Resources in February 2009. Essakane began commercial production in July 2010. The plant expansion to accommodate a substantial increase of hard rock, was completed on time at the end of 2013.

10. Akyem, Ghana. 371 koz.
Akyem is an open-pit gold mine located in Birim North District in the Eastern region of Ghana. Newmont obtained the mining lease for Akyem in 2010 and began commercial production in 2013. Akyem began construction in 2011 and achieved commercial production on schedule and below budget in October 2013. The operation currently employs more than 1,900 direct employees and contractors. 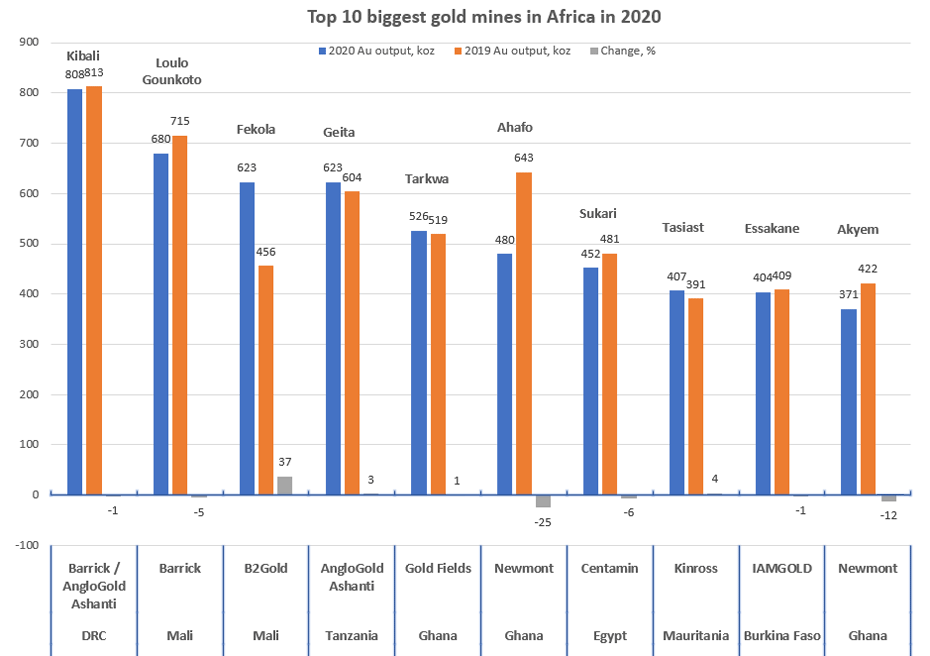