Gold price is starting to find its 'mojo,' should test $1,900 before year-end, says TD Securities 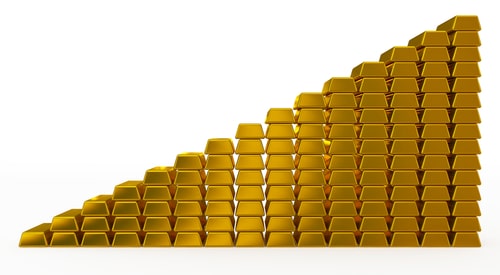 Gold is gearing up to test its key resistance at $1,800 as the precious metal is starting to find its "mojo" again after a disappointing start to the year, said TD Securities.

"After a challenging three months, spot gold is again starting to find its mojo and may soon attempt to challenge key resistance at just above $1,800/oz," strategists at TD Securities said in a report. "Money managers seem to be gaining conviction, after numerous statements emphasizing the Fed's commitment to easy money, that the central bank will stay dovish until the economy is functioning at full capacity, employment is running hot, and its favorite inflation measure, the core PCE, spikes some 0.5 percent above the implied target."

The precious metal's prices should even test the $1,900 before the end of the year as numerous inflation headlines will start to be backed up with more concrete data.

"Gold investors may once again be concluding that there could be more inflation on the way due to the developing trend of firmer-than-expected economic data and higher commodity prices … Since the evidence suggests real rates are most responsible for gold's price action, continued negative yields across much of the curve suggest that the world should again see gold test $1,900+/oz, before the end of 2021," the strategists wrote.

However, gold will want to ensure that the Federal Reserve will stay the course and remain accommodative before going all out. "The market will need to have a higher level of confidence that the rise in rates won't be re-energized by more favorable economic data, and that the Fed will prevent rates from rising to the point where they can adversely impact financial conditions," TD Securities noted.

There is a consensus developing that a sudden rise in the U.S. 10-year Treasury yields was an overreaction, which should calm the bond market and help gold prices recover.

"With gold now firmly above the 50-day moving average and straddling a key fib level, a modest and orderly upward rate migration and a less robust USD may well see specs increase short covering, with some more long exposure in the cards as well over the near-term," the strategists said. "It would not be a surprise to see gold move modestly north of $1,800/oz in the not too distant future, as it looks as though the curve overreacted back in March when yields jumped."

The key level to watch once the $1,800 is breached will be $1,840 an ounce as it could trigger a much bigger move higher. "The TD Securities CTA position tracker currently estimates that a move in spot prices north of $1,840/oz may catalyze algorithmic short covering on a large-scale," the strategists added.

According to TD Securities, one potential major driver of gold going forward is the de-anchoring of inflation expectations.

"If facts on the ground show above-target inflation and Mr. Powell says the developments are transitory and continues to accommodate as planned, fears that the Fed and the broader central bank community is behind the inflation curve could emerge. Worries surrounding the de-anchoring of inflation expectations could also develop, which would be a manna for gold," the bank's strategists said.

In the past, this has been observed during the pre-Volcker period, which saw gold make massive gains in the 1970s.

"Going back to the pre-Volcker period, gold was surging even as policy rates were rising. The reason for that was that the Federal Reserve Chair at the time, William Miller (March 8, 1978-August 6, 1979) did not tackle inflation head on, as he only took modest tightening action relative to inflation. The 1970s saw some of the highest rates of inflation in the United States in recent history, but he was cautious about tightening monetary policy as he did not want to crater the economy. The resulting negative interest rate environment sent gold into record territory, with prices surging to a high of $2,927/oz in current dollars on January 21, 1980," TD Securities pointed out.

There are similarities between what the U.S. is seeing today and the pre-Volcker period. "The Fed is perusing full (and now also an equitable) employment policy with more vigor than its inflation mandate, the U.S. Treasury is running a de facto hard-core Keynesian simulative fiscal policy and debt is outpacing GDP by a wide margin. Plus, there is now massive debt-financing of government spending and de-facto monetization," the strategists wrote.

This could lead to much higher gold prices going forward. "While we don't necessarily believe this to be the case, such conditions could easily prompt many to hypothesize that inflation expectations could get de-anchored and that the Fed could well find itself behind the curve in a material way. As such, gold at $1,900+ is very much in the cards over the next twelve months or so," TD Securities explained.