NEW YORK (Reuters) - Recent volatility in a handful of so-called meme stocks is putting the spotlight back on the tussle between individual investors and short sellers, months after a wild ride in GameStop captivated Wall Street's attention.

Stocks that have notched big swings this month include laser-manufacturer MicroVision Inc, a favorite on Reddit's popular WallStreetBets forum, whose shares have risen as much as 170% since April 20 before tumbling in recent days.

Biopharmaceutical company Ocugen Inc is up about 110% since April 20 while online video game platform Skillz, which has been added to the portfolio of Cathie Wood's ARK funds, is up about 45%.

Those moves do not approach the stunning, nearly 1,700% gain in video game retailer GameStop Corp in January, which was fueled in part by a flurry of buying that forced hedge funds like Melvin Capital to unwind their bets against the stock, sending it higher. Shares of the video game retailer and many other meme stocks that rallied in its wake are well off their highs, and retail trading has dropped from levels seen earlier in the year.

"We're seeing some return of interest to those Reddit-type stocks but not with the same pace and fervor we saw before," said Robert Phipps, a director at Per Stirling Capital Management.

Still, some market-watchers believe a smaller-scale face-off between retail investors and short sellers may have sparked part of the volatility in MicroVision and other recent movers.

Average short interest in a basket of 50 stocks with market capitalization of under $100 billion monitored by Vanda Research has climbed to levels last seen in January, the firm said in a report earlier this week.

At the same time, cash equity purchases and the premium spent on call options for MicroVision and some of the other gainers soared in recent weeks, an indicator of retail buying, according to analysts at Vanda, which tracks retail activity. 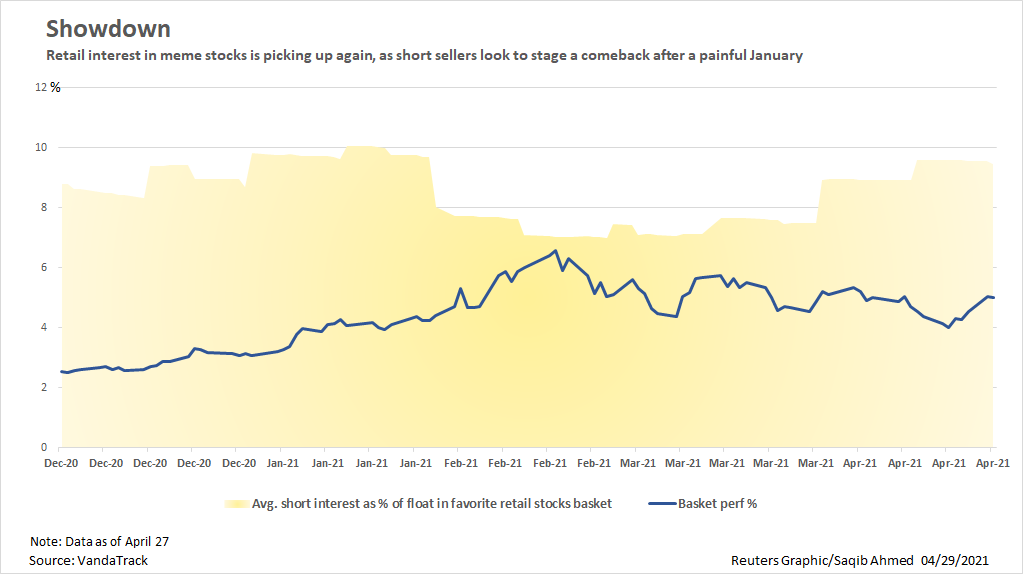 "With the precedent of Melvin Capital in mind, we suspect that the long/short community started to trim bearish bets as soon as they sniffed a potential comeback from the Reddit crowd," Vanda's analysts wrote.

MicroVision, which traded below $1 as recently as June 2020, is up 210% since short seller Hindenburg Research said it was betting against the company's stock on Dec. 22, illustrating the potential dangers bearish investors face when positioning against meme stocks. Hindenburg Research did not respond to requests for comment.

"Right now you can have a perfectly logical reason to short a stock and still take a terrible beating if a group of small traders pull together to push the stock in the other direction," said Phipps. 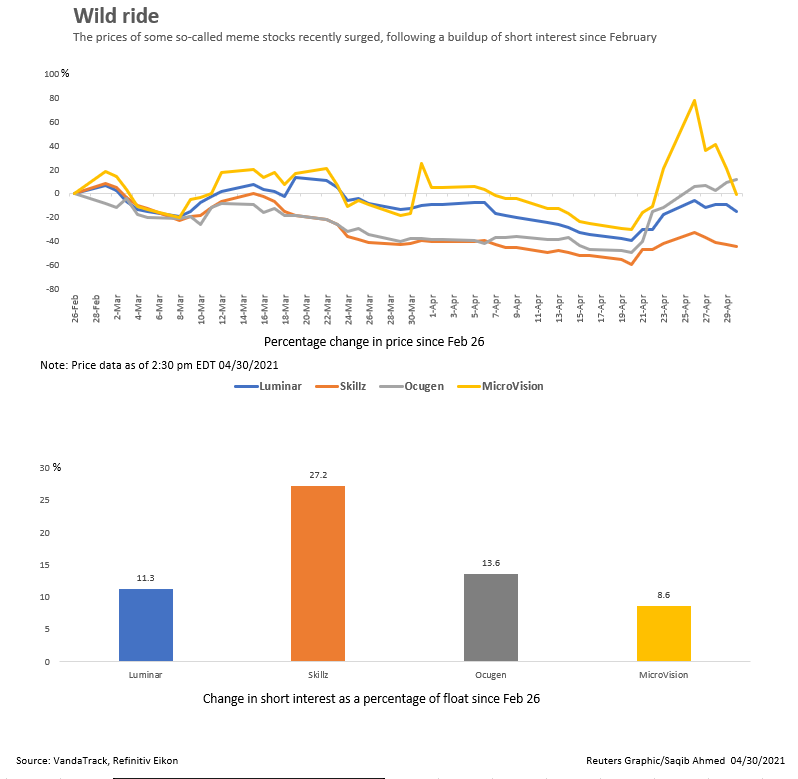 Carson Block, founder of short seller Muddy Waters Research, said he keeps a keen eye on online chatter and forums such as WallStreetBets, where users often attempt to coordinate their buying in stocks they believe are short-squeeze candidates.

Block said he is now more focused on technical aspects such as companies where a high percentage of stock is owned by insiders and institutional investors that are unlikely to sell the shares.

Whether the stars will align anytime soon for another move on the scale of GameStop's remains to be seen. That stock had a combination of short interest that peaked at about 145% of the float, according to S3 Partners data, a massive following among retail investors and institutions happy to jump in on the shares' wild ride.

Investors are "looking for history possibly to repeat or looking for stocks that are going to go parabolic," said Ihor Dusaniwsky, managing director of predictive analytics at S3 Partners. However, "GameStop was such an outlier in price moves that (it) is difficult for that to happen again."

There are signs, however, that broader trading activity among retail investors may be picking up.

In the latest week, there was $700 million in net retail buying of large-cap companies tracked by JPMorgan, compared with $500 million in the previous period, the bank said in a report issued on Wednesday.

Vanda Research said purchases of single stocks by retail investors have ticked higher, though they remain much lower than in previous months. Meanwhile, buying of exchange-traded funds by retail investors fell earlier in the week to its lowest levels since late last year, a potential sign they may be ready to take on more risk, the firm said.

Graphic: Purchases of single stocks and ETFs by retail investors -