"The dollar is trading generally firmer, reflecting a mild bout of risk aversion across assets," Scotiabank strategists said in a daily note.

Though April's headline survey numbers were lower than March, the U.S. recovery remained firmly on track with price pressures rising, while the Federal Reserve appeared to be in no hurry to tighten.

Financial conditions are nowhere near the level where the Fed would consider pulling back its support, New York Fed Bank President John Williams said on Monday, despite the economy being set to grow at the fastest rate in decades this year as it rebounds from the crisis caused by the coronavirus pandemic.

"However, as the market expectations are a bit too optimistic according to our experts it might put pressure on the dollar despite principally positive results," they said.

The dollar index, which measures the dollar's value against a basket of other major currencies, climbed 0.4% to 91.34, just shy of a near two-week high. It fell more than 2% in April.

Most of its gains were notched up against the Antipodean currencies, chiefly the Australian dollar even though commodity prices were generally firmer across the board.

The greenback advanced 0.6% versus the Antipodean currencies and 0.3% against the yen, euro and pound in trade thinned by holidays in China and Japan.

The Aussie dollar weakened as the country's central bank sharply upgraded forecasts for the local economy yet still predicted no tightening in its super-loose policy until at least 2024.

Sterling dipped marginally to $1.3870 ahead of a Bank of England meeting on Thursday. Analysts reckon the bank might announce a slowdown in its bond buying programme as the vaccine rollout bolsters Britain's economy.

For a graphic on USD positions: 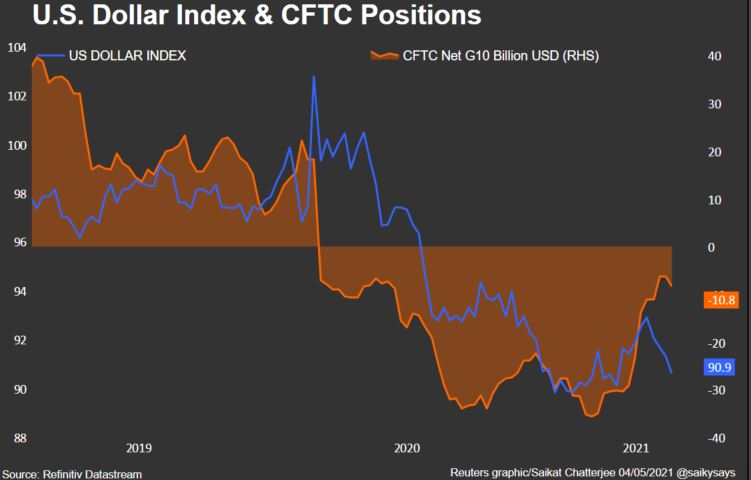