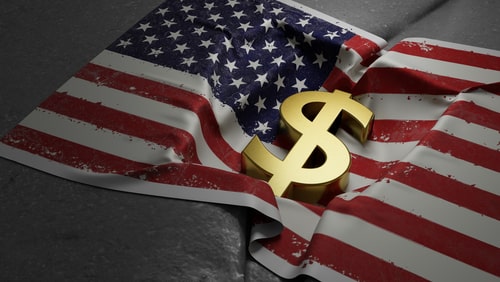 (Kitco News) The reach of the U.S. dollar as the global reserve currency is declining as central banks around the world reduce the share of U.S. dollar reserves, according to the International Monetary Fund (IMF).

The IMF's data showed that the share of U.S. dollar assets held by central bank reserves declined 12 percentage points since the euro was introduced in 1999. The share of the euro has been around 20%. At the same time, the Australian dollar, Canadian dollar, and Chinese renminbi rose to 9% in the fourth quarter.

If this trend continues, the move away from the U.S. dollar could impact broader currency and bond markets, the IMF noted.

"Some analysts say this partly reflects the declining role of the U.S. dollar in the global economy, in the face of competition from other currencies used by central banks for international transactions. If the shifts in central bank reserves are large enough, they can affect currency and bond markets."

The main reasons behind the decline in the U.S. dollar share of global reserves are short-term exchange rates and central banks' decision to move away from the dollar.

"There have been significant fluctuations in the interim, which can explain about 80 percent of the short-term (quarterly) variance in the U.S. dollar's share of global reserves since 1999. The remaining 20 percent of the short-term variance can be explained mainly by active buying and selling decisions of central banks to support their own currencies," the IMF wrote. "Taking a longer view, the fact that the value of the U.S. dollar has been broadly unchanged, while the U.S. dollar's share of global reserves has declined, indicates that central banks have indeed been shifting gradually away from the U.S. dollar."

Emerging markets will continue to play a crucial role as they shift away from the greenback, the IMF added.

"Some expect that the U.S. dollar's share of global reserves will continue to fall as emerging market and developing economy central banks seek further diversification of the currency composition of their reserves. A few countries, such as Russia, have already announced their intention to do so," the note said.

Nouriel Roubini, CEO of Roubini Macro Associates and professor at the NYU Stern School of Business, is among those who see the dollar's value weakening over time.

"We have very large twin fiscal and current account deficits. And because of the fiscal stimulus, our current account deficit will become even larger over time," Roubini told Kitco News. "Structurally, the dollar has to weaken. In the past, when the Federal Reserve was raising rates, there was enough capital inflow to keep the dollar strong. But now that the Fed is at zero and doing QE as far as the eye could see, the capital account is not going to provide enough inflow to sustain the dollar."

The greenback is also at risk because the U.S. uses it as a foreign policy tool, where certain strategic rivals such as Iran, North Korea, China, and Russia are punished, Roubini pointed out.

This has set off a global move away from the U.S. dollar and a move into gold, he added.

"The central banks have large stocks of the U.S. dollar assets, and they have to gradually reduce these assets. If China goes from the dollar into RMB, their currency appreciates. They don't want to do that. If they go into euro and yen, they increase the value of the euro and yen and create trade friction with Japan and Europe. Where are they going to go? Into something that cannot be seized by the U.S. and that is gold," Roubini said. "And that diversification from Treasuries into gold by central banks has already started. That's why gold went up by 60% between 2018 and the middle of last year. And the trend of the U.S. using the dollar as a tool of foreign policy and of weaponizing it will eventually weaken the dollar and gradually increase the price of gold."