(Kitco News) - Russian gold miner Polyus boasts the largest gold reserves base across the industry with a stunning 71% growth year-over-year.

With 94.2 Moz reported in 2020, Newmont has the second largest gold reserves base across the industry. This result was slightly lower than prior year adjusted total of 95.7 million ounces after adjusting for the KCGM and Red Lake divestments. Depletion of 7.5 million ounces was largely replaced by additions before revisions of 4.9 million ounces and net revisions of 1.1 million ounces primarily from mine plan improvements.

Barrick is third with 68 million ounces of gold reserves reported in 2020, a 4% decline over 2019. After adjusting for the disposal of Massawa, reserve replacement was 76% of depletion with a consistent reserve grade maintained. Similarly, when excluding the impact of Massawa, the net reduction in reserves year-on-year is approximately 2%.

Gold Fields is fourth with 50.3 million ounces of gold reported in 2020. A 2% increase in reserves over 2019 was primarily driven by increase at South Deep, resulting from a reduced COG and updated mine design
and scheduling.

In 2020, Polymetal’s gold reserves increased by 5% year-on-year
to 24.9 million ounces of gold driven by initial ore reserve estimates at East Bakyrchik (Kyzyl), Prognoz, and Pescherny (Voro hub). This has more than compensated for depletion at operating mines and ownership dilution at Veduga. 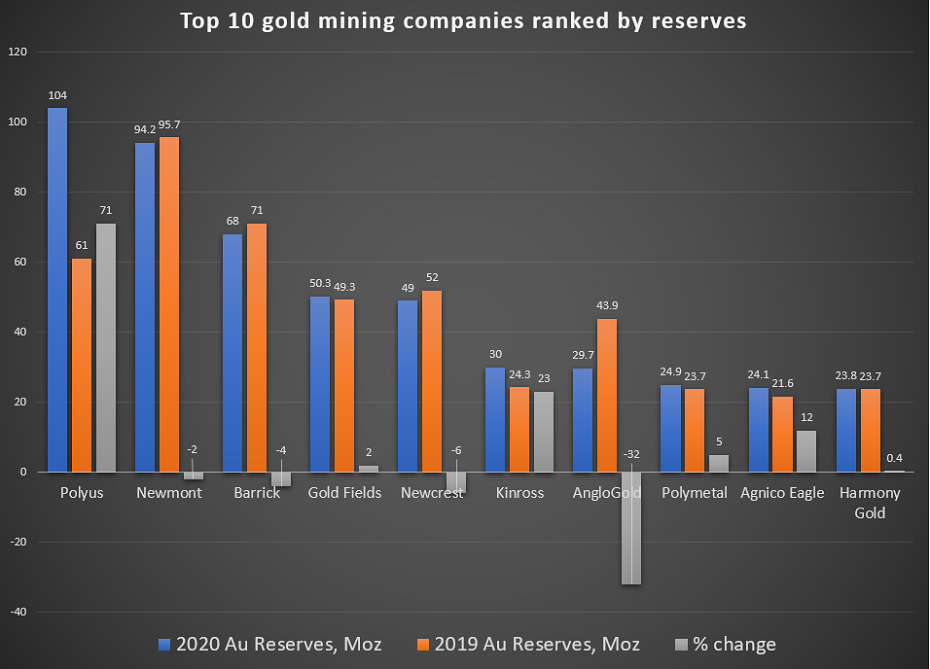