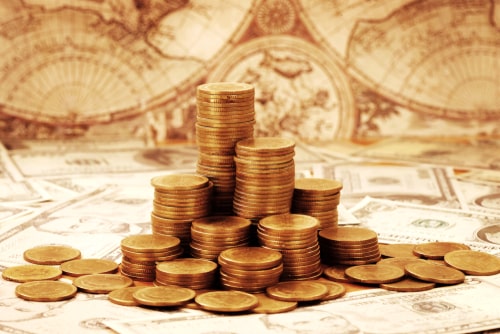 (Kitco News) The fear of inflation is back in the driver's seat for the precious metals, which saw gold rise more than 5% and silver more than 8% in the last 30 days.

Since bottoming out at the end of March, gold is up nearly $200, and silver is up more than $5. These are significant gains for both metals, which have been stuck in a downtrend for all of the first quarter.

"The psychology in the trade is that we are seeing more inflationary vibe coming into the metals. Silver got back positive for the year. Gold breached the $1,800 resistance and extended higher," Walsh Trading co-director Sean Lusk told Kitco News.

The news of more stimulus making its way into the system has the U.S. dollar trending down, which is a big game-changer for gold. "This is why we are getting more speculative action back into the metals. There's a bull momentum," Lusk said.

The inflationary story translates into big gains across all commodities and gold is seeing more of that price action this week, said SIA Wealth Management chief market strategist Colin Cieszynski.

"Gold has gone back to acting as an inflation hedge. We didn't get that initially. People who were more concerned about inflation were bidding up U.S. Treasury yields in the first quarter of this year," Cieszynski said.

The weaker dollar supports this inflationary vibe, Lusk explained. "We took out the 200-day moving average in gold. There is a lot of evidence of inflation. The minimum wage is being raised. More stimulus. This is all inflationary. And it is a quietly bullish backdrop as people come out of crypto and back into gold," he said.

The narrative is also shifting from inflation to stagflation, which is when inflation is accompanied by slow economic growth, said Gainesville Coins precious metals expert Everett Millman.

"Part of price rally we've seen is preparation for stagflation. Inflation does seem to be rising, and there are risks that the economy might not see growth to go along with it," Millman said. "Investors are preparing for that."

Today's macro-environment is starting to resemble that of the 1970s — the decade when gold and silver saw some of their most significant price gains.

"There are some parallels to what was going on back then, including price pressures, breakdown of trade relationships, tensions in the Middle East," Millman said. "The U.S. jobs numbers were disappointing, and some past data are being revised down as well. There is a possibility that the market can get caught off guard. Any big revision down could be a red flag."

While gold rallied, the crypto space saw a sizeable correction. This comes after months of bitcoin stealing investors' attention away from traditional safe-haven assets like gold.

The quick rise and popularity of the crypto space held back gold this year, Cieszynski noted.

"When bitcoin took off, people who were looking to trade alternative currencies and precious metals went into bitcoin instead. Now, we've got bitcoin coming back off, and some of that money is finding its way back to precious metals," he told Kitco News.

Caution in the near term? Here are key price levels to watch

Some caution might be warranted after gold and silver hit 3.5-month highs early on Tuesday.

"We are starting to see gold bump up against resistance at $1,880. In the short term, gold is getting overbought. It is possible to see gold pause in the near term. But the underlying trend has turned back upwards," Cieszynski said.

There is always a risk of people starting to take profits, especially if they bought gold at around the $1,700 level.

"The only major obstacle between where gold is now, and the $1,900 level is people taking profits. If you bought at $1,700, this might be a good time to unload. But getting past $1,900 is on the horizon," Millman said.

Another risk is if the 10-year Treasury yields start to rise again along with inflation fears. "The market would need to see yields move lower for gold to keep on rising. If we hit increased geopolitical events, that would be supportive precious metals," Lusk said.

At the current $1,866 an ounce level, gold is still undervalued since it is still negative on the year, Lusk highlighted. "More fund money is coming in. The $2,000 an ounce level would be fair value for gold. We will have to see if we will get there by year-end."