Gold price is up $220 from March lows, but watch this big risk next week 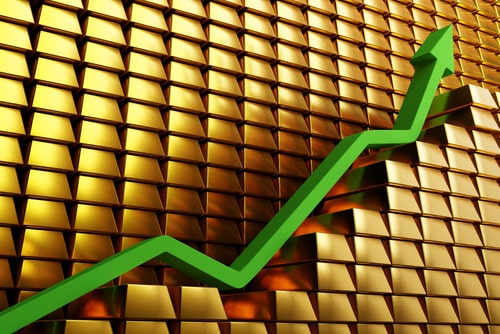 (Kitco News) Gold price is on its way to the highest levels seen this year after recovering more than $220 since the bottom at the end of March. Analysts are now pointing to the $1,950 an ounce as the level to watch, citing a perfect environment for gold.

Gold was trading around $1,900 an ounce on Friday after already breaching this level earlier this week.

“Gold did it. For the past two months, we’ve been dealing with calls saying gold will fall to $1,600. The market is excited about the gold trade right now,” OANDA senior market analyst Edward Moya told Kitco News. “The fact remains that if the U.S. Treasury yields are grounded, it is going to take a substantial improvement in the labor market to change the Fed’s tone.”

“On the one hand, we are seeing somewhat elevated inflation with somewhat disappointing macro indicators. Most striking were the retail numbers from April. Also, employment numbers from a month ago came in a quarter of the strength we thought,” Melek said. “Economic indicators are decelerating, expectations are being placed lower, and inflation is still up. It’s hard to see the Fed tighten economic conditions when you have data slowing down or plateauing.”

The Fed seems to have convinced the markets that it will remain patient despite higher inflation. “The central bank is providing a green light for gold prices to continue to rally higher. The $1,950 is the next key level to watch,” Moya said.

Also, there are signs that central bank demand is improving, he added. “With more central banks buying gold and more retail investors going into gold-backed ETFs, there is a potential for a bullish breakout,” Moya added. “The market could become fixated on the fact that we are not that far from record highs. Momentum is really starting to build,” Moya said.

Crypto volatility is also continuing to provide some support for gold, analysts told Kitco News. “Crypto flattening out helps gold. There is definitely a correlation,” said Phoenix Futures and Options LLC president Kevin Grady. “This is the environment the bulls have been waiting for. The $1,938 an ounce was the high on January 7 — this is a target for gold. We should be retracing this level.”

The big risk for gold

Moya is not ruling out choppy markets for the next few days due to lack of liquidity in light of the Memorial Day long weekend in the U.S. But a major obstacle for gold next week could be Friday’s employment data out of the U.S.

The big issue would be if the May numbers surprised on the upside. “Next week, a lot of investors are going to look at the employment number and wages. That is a big risk for gold. If we see massive upside surprise and robust revisions for the prior month, that has potential to send the 10-year Treasury yields to 1.70, and gold could fall $30-$40 in a knee-jerk reaction,” Moya warned.

“Gold had a strong recovery, and it is susceptible to a correction. If employment beats expectations, yields will rise, and the U.S. dollar recovers,” he said. “In gold, there are also many investors trying to get to breakeven on year, which is around $1,918. This puts gold at risk of profit-taking at these levels,” Streible explained.

According to Moya, the supply problems are likely to continue to plague the U.S. labor market. “Last month, one million new jobs was the consensus. Now, not even the highest projection is for one million jobs for May,” he said.

The nonfarm payrolls data are due out on Friday. Market consensus is projecting for the U.S. economy to have added 700,000 jobs in May and the unemployment rate to have dropped to 5.9%.

“The U.S. jobs report is the undoubted highlight next week after the disappointing outcome of ‘only’ 266,000 jobs created in April. There seems to be little problem with demand given the robust economic data and surveys, such as the NFIB’s, indicating that businesses are struggling to find labor. Instead, the problem is supply – firms cannot fill vacancies,” said ING chief international economist James Knightley.