Kitco estimates that gold mines in Canada produced 1,488 koz of yellow metal in Q1 2021, which is 7% more than a year before. The domestic quarterly gold production has reached new highs in first quarter.

The following is the list of largest gold mines in Canada by production in Q1 2021.

Jointly owned by Yamana Gold and Agnico Eagle, Canadian Malartic was the largest gold mine in Canada in Q1 2021. The mine had an exceptional first quarter, producing 179 koz of gold, which exceeded plan and greatly, by 38%, exceeded the comparative period in 2020, due to higher grades and recoveries from the ore found deeper in the Malartic pit. Additionally, during the month of January, the mine achieved record tonnes mined in a month.

Gold production at Canada’s third largest LaRonde mine, owned by Agnico Eagle, increased by 34% when compared to the prior-year period primarily as a result of a higher throughput levels and higher grade. The LaRonde complex performed above plan in the first quarter of 2021 primarily due to increased productivity achieved with the use of automated equipment and unanticipated ore extracted from the development in Zone LR11-3.

Gold production at another Agnico Eagle’s Meliadine mine in the first quarter of 2021 increased by 26% when compared to the prior-year period primarily due to higher throughput as Meliadine delivered a strong performance over the quarter with the processing rate at over 4,600 tpd and higher gold grades than planned which resulted from an adjustment in the mining sequence. In the first quarter of 2020, the Meliadine processing plant was negatively affected by a failure of the crusher apron feeder resulting in through-put levels below expectations. 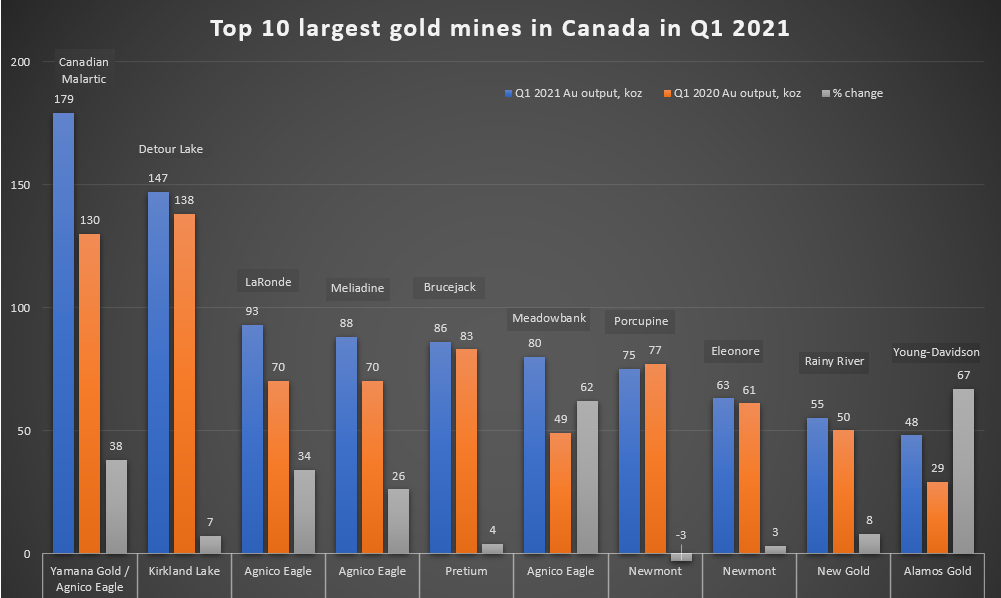