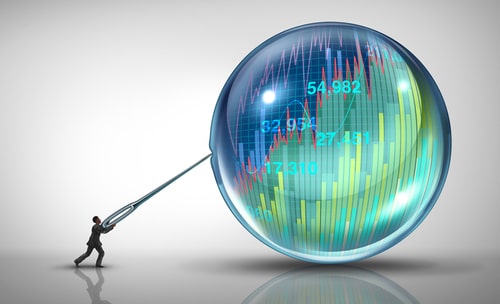 (Kitco News) After deleting all his tweets just over two months ago, the "Big Short" investor Michael Burry is back with a clear message — markets are in the biggest bubble in history.

Burry's most recent Twitter activity shows that the famous investor is worried about speculation in the markets more than ever.

"People always ask me what is going on in the markets. It is simple. Greatest Speculative Bubble of All Time in All Things. By two orders of magnitude. #FlyingPigs360," Burry tweeted on Tuesday.

The hashtag #FlyingPigs360 is likely in reference to an old Wall Street phrase: "Bulls make money, bears make money, but pigs get slaughtered," which is used as a caution against greed.

People always ask me what is going on in the markets. It is simple. Greatest Speculative Bubble of All Time in All Things. By two orders of magnitude. #FlyingPigs360

Burry was the investor profiled in Michael Lewis' "The Big Short" book about the mortgage crisis. He now runs Scion Asset Management.

Burry is most known for spotting the mortgage crisis ahead of time and making a fortune against the U.S. housing bubble. However, back in 2019, the famous investor also made millions by purchasing shares of GameStop, which was well before the Reddit frenzy took over the stock.

Back in February, he joined the inflation debate, making a comparison to the 1970s period. He told investors to brace for inflation while pointing to a boom in demand due to the fiscal stimulus being injected into the economy.