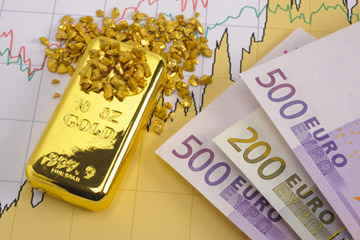 (Kitco News) - The gold market is finding some support from the European Central Bank (ECB) as its president Christine Lagarde reiterated the central bank's stance that it is not ready to look at tightening its monetary policy anytime soon.

Testifying before the European Parliament's Committee on Economic and Monetary Affairs, Lagarde said that the ECB will continue to maintain its ultra-loose monetary policies as it is prepared to see through current inflation pressures.

The gold market has been trading near session highs throughout Lagarde's testimony. August gold futures last traded at $1,783.40 an ounce, up 0.81% on the day.

Lagarde added that although inflation pressures are pushing higher throughout the euro area, they are being driven by temporary factors. For example, she said that that bottlenecks in the supply chain that are helping drive prices higher should start to fade through the second half of the year.

"Inflation is temporary and technical and will fade as we head into 2020," she said.

"While on the downside, the spread of virus mutations continues to be a source of risk, on the upside, brighter prospects for global demand and a faster-than-anticipated increase in consumer spending could result in an even stronger recovery," she said in her opening statement.

"While partly reflecting improved economic prospects, a sustained rise in market rates could translate into a tightening of wider financing conditions that are relevant for the entire economy. Such a tightening would be premature and would pose a risk to the ongoing economic recovery and the outlook for inflation," she added.

Lagarde's comments on ECB monetary policy come in stark contrast to the Federal Reserve, which shocked markets last week with its economic projections that highlighted the potential for two rate hikes by 2023.

Lagarde said that the ECB is paying attention to the U.S. central bank; however, she added that both economies are at different stages in the recovery. She also said that she would not pass judgment on when another central bank is expected to raise interest rates.

"We believe the ECB's monetary policy stance is well-positioned," she said.

The rise in home prices was one risk that was brought forward during the testimony. Lagarde said that is one sector they are currently monitoring.