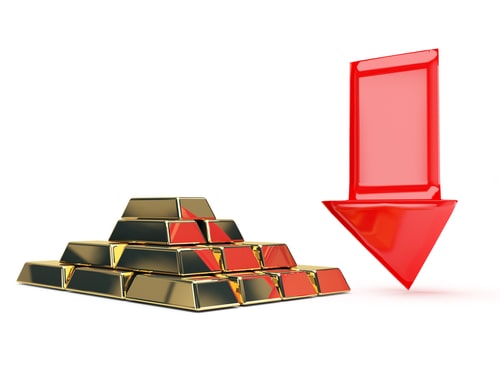 (Kitco News) Gold saw a sharp drop on Tuesday as prices touched 2.5-month lows and headed for the worst June performance since 2013.

The yellow metal is trading down 7.6% on the month. On a month-on-month basis, gold is on track to see its worst performance since November 2016, when the precious metal dropped more than 8%. In June 2013, gold dropped 11%.

This week's two main headwinds are a stronger U.S. dollar and higher U.S. Treasury yields in the marketplace that is not seeing a lot of risk aversion. The U.S. dollar index was last trading at 92.03, up 0.13% on the day, while the 10-year Treasury yield was at 1.488%

"A stronger dollar and rising interest rates on the day are seeing gold continue to bleed lower. Gold is in need of a catalyst to re-energize the market, as the lack of impetus to buy the yellow metal in the aftermath of the FOMC continues to suggest the bar is low for continued weakness," said strategists at TD Securities.

The quick spread of the Delta variant in other countries is providing additional support for the dollar by drumming up its safe-haven quality.

"Fear that the new mutation of the COVID virus will slow the global recovery has sent ripples across the global capital markets. The foreign exchange market has the clearest reaction, and the dollar is bid," noted Bannockburn Global Forex chief market strategist Marc Chandler.

Gold has been having a tough time since it failed to breach the $1,900 an ounce level at the beginning of June. The technical position worsened after the mid-June selloff that was triggered by a hawkish Federal Reserve statement, which signaled two potential rate hikes as soon as 2023.

Fed officials also sound more confident this week, with Federal Reserve Bank of Richmond President Thomas Barkin stating on Monday that the central bank has made "substantial further progress" toward its inflation goal in order to begin tapering.

All eyes are on the U.S. employment report, which is scheduled to be published Friday morning.

"Jobs data Friday will be the highlight for the week. Consensus sees 700k jobs added vs. 559k in May, with the unemployment rate expected to fall a tick to 5.7%," said BBH Global Currency Strategy head Win Thin. "As things stand now, we continue to expect a tapering announcement over the summer, with actual tapering by end-2021 and rate hikes by end-2022."

A few things at play could turn this bearish gold price action around, including disappointing macro data out of the U.S., which could stall the Fed's tapering talks.

"As far as what could be a positive catalyst for gold, a broader data disappointment trend could eventually prove to offer support, as the market reflects on continued economic risks at a time when rates markets have priced a first hike in December 2022," TD Securities strategist added.

However, the real pace of inflation will remain distorted for months to come, which will make it hard to tell whether or not the Fed is pricing in its inflation expectations correctly.

"While this offers hope for gold, underlying inflation trends will likely remain distorted for months, while the potential for a stronger jobs report this week could also inhibit positive flows into gold for now," the strategists wrote. "In this context, gold is not completely out of the woods just yet, with prices now quickly dropping toward the $1,730/oz region, which would open the door to another round of CTA selling."