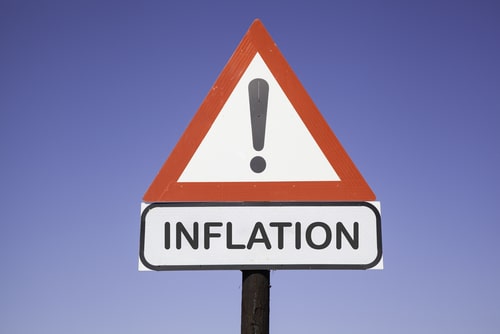 (Kitco News) Inflation is already here, but prices could rise significantly higher in the next several years, creating a gold-buying panic, according to Goehring & Rozencwajg Associates managing partner Leigh Goehring.

"We already have 5% inflation. And it's safe to say this 5% inflation will stick for the next six to 12 months. And then we could have a black swan event, and prices go significantly higher. Just like what happened back in the 1970s," Goehring told Kitco News.

Governments around the world can't continue to print massive amounts of money with no consequences. And these harmful negative effects will start to come into view as soon as next year, Goehring pointed out.

One very important element that is currently missing from the risk of rising prices is inflationary psychology.

Right now, there is just inflation but no inflation psychology. However, this could change in 2022.

Either way, inflation is going to be one of the major problems of this new decade. "All the notions that years of money creation is not harmful will be disabused as we progress through this coming decade," Goehring warned.

Higher oil prices could be one of the black swan events that trigger that inflationary psychology. "There have been several monumental events that have happened in the global oil industry that are going to have unintended consequences," Goehring pointed out.

The two big things to watch for in the oil space are the OPEC members getting more pricing power while the non-OPEC oil supply continues to slow.

"The biggest competitor to OPEC oil is non-OPEC oil. And when the supply of non-OPEC oil slows, OPEC gains market share and pricing power," Goehring said. "At the same time, non-OPEC oil supply has stopped growing. And now, with demand recovering, OPEC is going to get pricing power. Iran, for example, could very well lead the charge for OPEC to significantly exploit their newfound pricing power."

Goehring does not see EVs as taking oil out, projecting a much stronger demand for oil going forward.

"By the end of Q4 2022, we'll be back over 100 million barrels of oil a day, which is near the old peaks," he said. "This would mean that total global oil demand may exceed total global oil pumping ability, even with OPEC pumping full-out. This never happened before."

And as the world tests what it's like to exist in a reality where total oil demand approaches total pumping capability, the risk is another spike in oil.

"Any supply disruption is going to have a magnified effect on prices. And it's going to play into the whole concept that OPEC has huge amounts of pricing power," Goehring stated. "I wouldn't be surprised to see oil go back over $100 at some point in 2021. And in 2022, oil could see a big spike and go between $120-$160."

This is where gold comes in. With higher inflation settling in, investors will be searching for protection, and that will inevitably lead them back to gold.

"The return of inflation is going to have massive consequences that we're not even thinking about. What is it going to do to global bond markets? And how will all these countries finance all that debt if all of a sudden bond markets around the world are incredibly weak? People will start looking for protection," Goehring said. "We're going to all come back to gold. We know that gold will be an asset class that will give you protection. That's going to create this gold-buying panic in the future. Timeline for this is 2023-2025."