Primary gold operations are defined by Kitco as “mines where gold contributed to 80% or more of revenues from operating activities.”

Yamana Gold's Jacobina mine in Brazil was the lowest cost gold mine in South America measured by AISC. In Q1 2021, the mine's AISC of $770/oz benefited due to the timing of exploration spend, which saw lower activity in the first quarter, and is expected to ramp up in the second quarter.

Pan American Silver's Shahuindo mine in Peru is third with AISC of $844/oz in Q1 2021. AISC were 9% higher than a year ago, primarily due to the lower gold production which increased costs on a per ounce basis.

Newmont's Merian mine in Suriname is fourth with AISC of $864/oz in Q1 2021. AISC increased by 22% primarily due to lower gold ounces sold, lower gold ounces mined as a result of a higher strip ratio and higher gold price-driven royalties.

Equinox Gold's Aurizona in Brazil sits fifth. The mine's AISC of $879/oz, which is an 8% improvement over a year ago, benefited from steady plant throughput by using stockpile material during periods of high rainfall, and a weak local currency compared to the US dollar.

The complete list of the top 10 lowest cost gold mines in South America in Q1 2021 can be found on the chart. 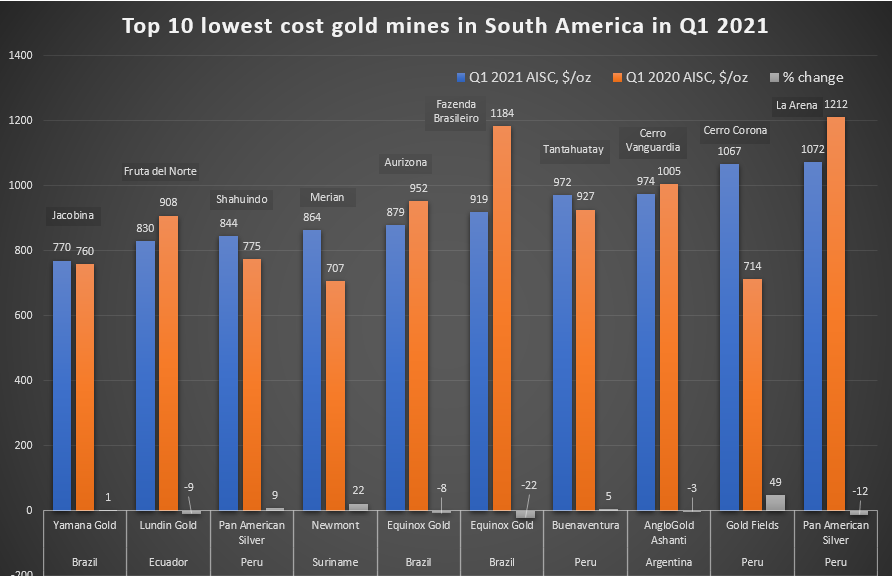